The Super Welterweight Queen of the WBA Costa Rican native Hanna Gabriels and her rival, Argentinian native Abril Vidal, were present at a press conference held in San Jose, Costa Rica, which will play host of the match to be held on Wednesday.

The evening will be presented by US promoters DiBella Entertainment (Lou DiBella) and Fercobox (Hector Fernandez de Cordova), which promises an international show to all of the fans.

Hanna Gabriels will not only rise to the ring as one of the best female boxers in the world but also as a woman dedicated to helping others. Proof of this is her recent appointment as a High Profile Collaborator for the United Nations for Refugees (UNHCR).

His rival Abril Vidal has not tasted defeat since her debut in 2018. In that journey she has reaped 8 wins in a row and has scored 3 knockouts.

The conference was very busy, as it usually is when Hanna Gabriels gets into the ring, since she is a national and international icon.

The first to speak was the visitor Abril, who said: “First of all thank you to Hanna for choosing me and second I want to ask that there be no localist failure. I feel very happy to be here and I hope to take the title back to Argentina,” said the challenger.

The champion Hanna Gabriels was clear and forceful at the time of taking the microphone, saying “The time has come to test everything we have worked all this time, it is time to show my power and defend what is mine.”

“It’s time to show what we’re made of,” the Champion further stated, “I will give everything to defend my title at home; It is also another opportunity to show the power of women in sports.”

The event will be held at the Eddy Cortes National Gymnasium, headquarters that expects to serve 4 thousand people for the fight. Tigo Sport will be in charge of the transmission of the fight.

Pacquiao and Thurman have grand arrivals in Las Vegas 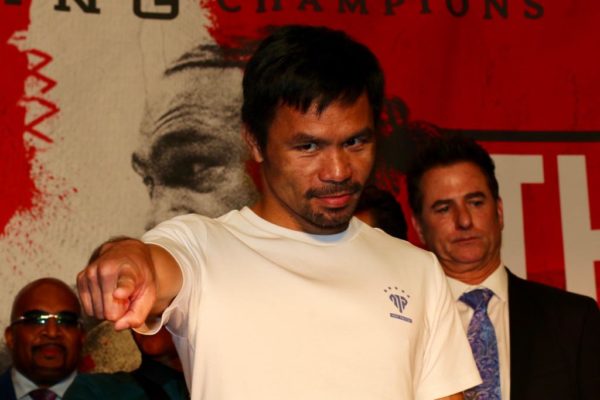