The second day of fights of the concentration camp of the WBA FUTURE CHAMPIONS has been held with 21 fights that were a great show for the massive public who attended once again to the stands of the Coliseum of Fights of the Atanasio Girardot stadium.

The event in the 51 kilograms stood out with the World Light Flyweight Champion of the World Boxing Association along with the Olympic medal winner in Rio 2016, the Colombian boxer Ingrit Valencia. Both offered a great fight despite the three rounds result. These two warriors offered a great evening, along with Yuverjen Martinez against the Puerto Rican Yankiel Rivera in the 52 kg category. Also, there was a hard fight between the professional boxer Erica Farias against the Puerto Rican Kiria Tapia. Each fight stood out and later the colorful opening party began.

After recognizing the eleven countries that were participating in the scenario, the authorities began their speech: the head of the WBA Amateur Boxing Committee, Jesper Jensen followed by the new INDER director Diana Toro Zuleta from Colombia. All the people involved made a special emphasis on all the work done by the organization headed by Gilberto Mendoza, who was the forefather of the first preparatory campus offering athletes the opportunity to better face the pre-Olympics before Tokyo 2020.

For his part, the President of the Colombian Olympic Committee, Baltazar Medina, said some special words: “I want to share with you some thoughts in order to review our commitments to the sport. There is no doubt that the world sport is facing a crisis of credibility and trust and we shouldn’t ignore that fact. For this reason, the International Olympic Committee have promulgated a document named “THE 2020 LIST” which contains 40 recommendations for us, the people who belong to this beautiful sport, to check our practices, improve our customs and renew our commitment to this sport.” Mr. Medina chose to share two important recommendations: “The first one is about putting athletes in the heart of the Olympic movement, which means that athletes and only athletes are the ones who deserve to receive all the benefits of the sport and they must receive our full attention and respect. The second one is trying to put into action the values of the Olympic sport, especially the fair play value, which is a necessary condition that each and every one of us must attend from our role, whether as judges, technicians, all of us.” As he finished his words, thunderous applause filled the room.

Immediately, Gilberto Mendoza said some words to recognize and thank to all the delegations that were in the WBA FUTURE CHAMPIONS concentration camp and highlighted how important is the sport for the citizens’ lives: “We want the boxing sport to be fraternal and the motivator which generates that passion in the citizen to succeed and dream that they can achieve whatever they want”, said the president who won the emotional ovation of all the attendees.

In addition, we highlighted the presence of the World Champions Reguis Preogreis, Hanna Gabriels, Robert Garcia, Jenela Mrjedovich. As well as the Colombian boxing legends, Antonio “Kid Pambelé” Cervantes, Fidel Bassa and Miguel “Happy” Lora. And as a final honor, we had the performance of a renowned Venezuelan artist who has been an International sensation in the Latin music: NACHO.

Below you will find the results of the second day of fights:

THE LAST DAY OF COMPETITION OF THE WBA FUTURE CHAMPIONS 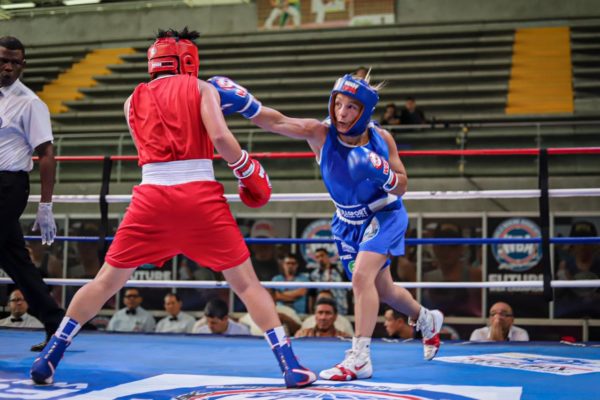