The first billboard of the WBA Future Champions program, with which the oldest sanctioning body in the world will begin its direct support for amateur boxing, will have 12 fights between boxers of various nationalities this coming Friday.

The event that will take place at Hialeah Gardens High School, in South Florida, already has its billboard and will begin at 3:00 pm on a day that will be very important for the entity.

In the first match, Dayana Sanchez, from Argentina, will face Kiria Tapia, from Puerto Rico, in the 60 kilograms class. They will be followed by Lucia Perez (ARG) and Nisia Rodriguez (PUR), in the 69 kg class, while the third match will be between Leonela Sanchez (ARG) and Melanie Costa (USA) in the 57 kg class. After these three elite fights, the awards will be made.

Around 4:15 pm the second round will start with three more fights. The fourth fight will be starring Erik Tudor (USA) and Bryan Ojeda (PUR), in the 69 kg elite class, the next match will be in 57 kg elite class between Mirco Cuello (ARG) and Jan Rivera (PR), while the final group will be the 63 kg juveniles Nico Lanza (NIC) closing against Taiel Chavez (ARG).

In the third round, Aaron Aponte (USA) will be in action against Omar Rosario (PUR) in the 63 kilos elite class, while two youth bouts will accompany the action.

Finally, the action will be closed with the fight between Jimmy Brenes (NIC) against Brian Arregui (ARG), in the 69 kg class. Tatiana Rivera (PUR) will face Shakira Wood (USA) in the 60 kg class and Carlos Arce (USA) will clash with Brian Perez (PUR) in the 63 kg class.

The WBA is excited about the amount of talent that will see action in the program and hopes that it will be the beginning of something much bigger in favor of the integration of boxing while always following the “One Boxing” plan of the president of the organization, Gilberto Jesus Mendoza.

Rene Alvarado was received by Renzo Bagnariol in Nicaragua 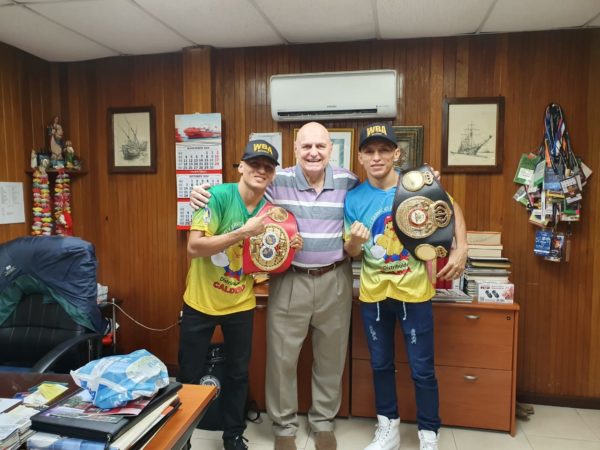