The WBA “KO drugs” program was officially opened with the attendance of the WBA Executive Committee, chaired by its President, Gilberto Mendoza, the municipal authorities represented by Professor Venerando Diaz Martinez, Mayor of Tapachula; Armando George, Director of Mesoamerican development of the southern Secretariat border, and Patricia Cardenas, operation coordinator of the Mesoamerican exhibition, the Queen of the Mesoamerican fair and former world champion Roberto “hands of stone” Durán.

Regarding the event, the high communal representative pointed out that the “KO drugs” serves as complement to the work being done by the State and said that a few days ago they had opened the “Rehabilitation of the Centre of cohabitation” where athletes train and it was a formerly an abandoned site. On the other hand, she referred to the place where the international event will be held next Saturday: “the Mesoamerican village fair is symbolic for us because many companies come from different countries to expose and provide their products”. 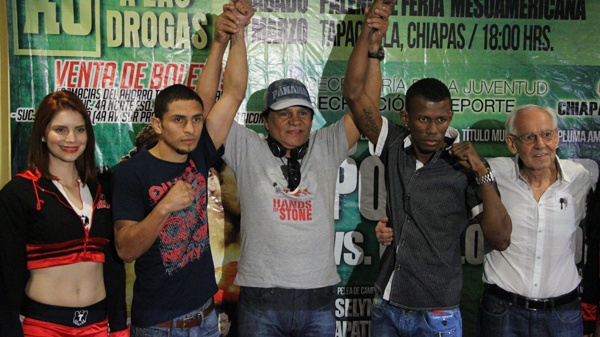