Tapachula, Chiapas, Mexico. This Thursday, took place at the Holiday Inn Express Hotel the press conference to provide details of the “XXXI KO to drugs” boxing card that will take place on Saturday, March 21.

During the ceremony, the WBA President Gilberto Mendoza, applauded the fighters: “I wish all of you the best, in and out of the ring. “We will have a motivational program: Prevention is better than being sorry”, said referring to the KO drugs. The Mega event will offer two world title fight and a vibrant undercard. Alejandro Brito, representative of Zanfer promotion said: “we are much honored that the WBA is in our country. For the first time in this city we will have two world title fights the same night. We will have a great event”.

Two title fights in Tapachula
At the time to talk, the stars of the WBA super featherweight interim vacant title fight, Chiapas Emanuel “Pollo” López (17-4-1, 6 KO’s) said he had a great preparation, “I feel strong and I will give everything on the ring”, said the fighter who won his last two fights. Then Colombia Carlos “Batey” Padilla (15-1-1, 9 KOs) thanked the WBA for the opportunity to fight for a world title. “This is the opportunity any boxer longs for. I will win each and every round.”, he said.

The female contenders were heard when Joselyn “Tapatia Princess” Arroyo (17-0, 7 KO’s) said “I expect this title stays in Chiapas”. The Jalisco fighter will fight ten rounds for the WBA flyweight interim title and will fight Capital’s Maribel “Pantera” Ramírez (12-7, 5 KO’s).

In the lightweight, we will see the rookies Mohamed Rodriguez vs. Leonardo Jimenez; and in Super bantamweight Maximino Tola vs. Salvador Hernandez.

Weigh-in and celebrities
The weigh-in ceremony will be on Friday at 12:30 pm at the Puerto Chiapas cruise terminal. This “KO Drugs” program will feature the presence of Boxing figures Stars: former world champions, Julio Cesar Chavez, Marco Antonio Barrera, Roberto Durán, the local Romeo Anaya and current Mexican champions Jackie “The Aztec Princess” Navas and David “Tornado” Sanchez, as well as the international announcer, Jimmy Lennon Junior, among others.

Braehmer in weight to defend against Krasniqi 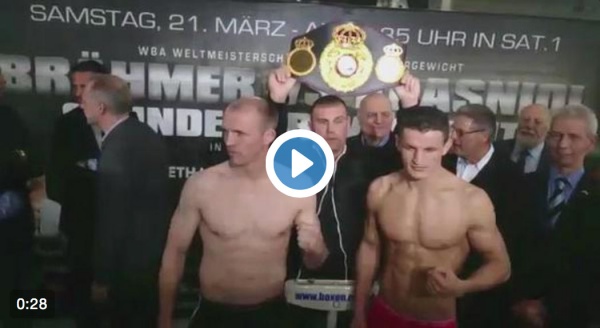