The World Boxing Association (WBA) Classifications Committee announced its rankings for September, which includes the 15 best boxers in the 17 weight divisions. Only these boxers have the possibility of aspiring to a world title fight within their respective divisions.

The “Boxer of the Month” distinction was awarded to Mario Barrios, who overcame Batyr Akhmedov in a highly competitive fight at the Staples Center in Los Angeles, California. After twelve competitive rounds, the voting of the judges came back 114-112; 115-111; and 116-111 in favor of Barrios.

Mario “El Azteca” Barrios took over the Super Lightweight Title of the WBA after the intense combat that featured lots of back and forth action. Although Barrios had 17 more fights than Akhmedov, the Uzbekistan fighter held back nothing and went out to win the fight as if his life depended on it.

The first assaults of the fight were dominated by Barrios based on his combinations, stomach blows, and good mobility in addition to adding a knockdown in his favor (4th), which until then indicated that things would be easier.

In the second half of the fight things began to change radically as Akhmedov continued fighting like he could win, landing his left and right to Barrios’s jaw. Increasingly he looked worn out and cornered until he suddenly connected a hand to Batyr’s face to send him to the canvas in the last round, thus tilting the cards in his favor.

With the victory Barrios improved his record to 25 wins, 0 losses and 16 knockouts. The blue-chip prospect thus turned into a world title holder with the tough victory against a very game opponent.

The honorable mention for boxer of the month is Joseph Diaz Jr., who captured the World Boxing Association (WBA) Gold Super Featherweight title after defeating Venezuelan Jesus Cuadro by majority decision on a Golden Boy Promotions card in Mexicali, Mexico.

WBA Female September Rankings and Boxer of the Month 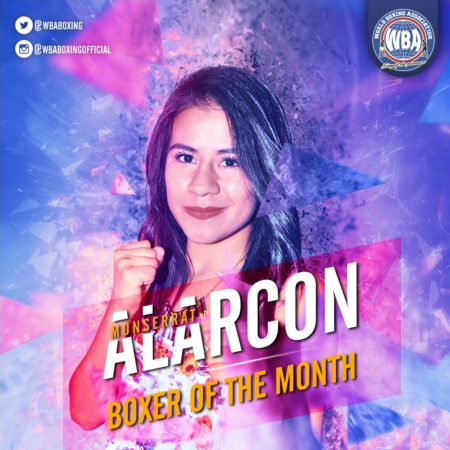