The World Boxing Association (WBA) congratulates Panamanian promoter Rogelio Espiño, who is celebrating 20 years working for boxing in his country and the world.

Two decades ago, on October 28th, 2000, the experienced promoter emerged in professional boxing with the first event organized by his company “Eventos y Promociones del Istmo”, opening a story full of satisfaction.

Espiño is a reference in a country with such a long boxing tradition, and has been an ally of the WBA throughout his journey in the sport of the flat noses. He has been a promoter of the discipline in Panama and, thanks to him, boxers from several nationalities have become champions, especially Panamanians and Venezuelans.

“I always practiced soccer, and I only followed boxing because I was a fan of Roberto Durán, and I remember that we used to have family gatherings at home to watch him fight”, he said in an interview with Hector Villarreal through YouTube.

But as fate would have it, he met people involved in the sport and couldn’t refuse to support various boxers. Great boxers like Pedro Alcazar, Vicente Mosquera, Ogleidis Suarez, Jezreel Corrales, Celestino Caballero, among others, have been his pupils.

Espiño recently announced that he plans to retire and the WBA hopes it won’t be for long because boxing needs people like him. However, his work is impeccable, both for the sport and for the youth.

“What satisfies me most, is to see retired boxers who are now professionals, and perhaps did not become champions, but avoided falling into the wrong path and are responsible and great examples”, said Espiño about his role.

The WBA mourns the death of Miguel Ángel Castellini 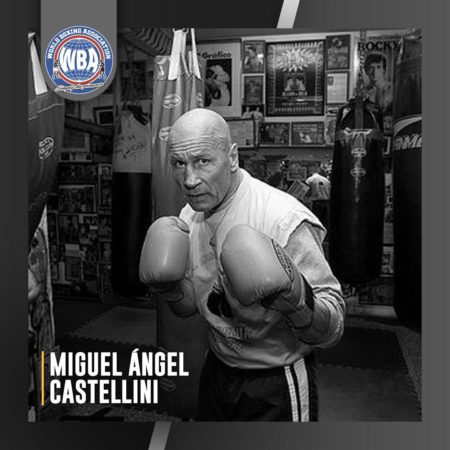