One of the most interesting points of the first day of the 98th Convention of the World Boxing Association (WBA), that opened this Thursday, in Fuzhou, China, was an interview of Argentine journalist Carlos Irusta to President Gilberto Jesus Mendoza, about the event that is being held this week in Oriental lands.

Without any complex or limitations, the WBA boss spoke to Irusta in a large interview that was characterized by a very rich interaction between the two boxing men. The interview began with China and why the WBA came to this great country.

“Approximately 12 years ago we held our convention in Chengdu. While China is a world economic power, we have noted its interest in education and sport. Five years ago we set up a regional body called WBA China. As we saw this new market, we took part in a development plan. Fuzhou offers the possibilities of creating a world academy, which is the WBA Academy,” replied an enthusiastic Mendoza.

“Beyond China, I think the boxing organizations are living in a tough time. We are in a market where promoters are on top of our brands. We need a renaissance, we need to re-engineer the institutions to keep this activity alive. One way is to involve amateur boxing and another is through education to complement these alternative markets,” he went on talking about the current reality of all the organizations governing boxing.

One controversial point, which has been on everyone’s mouth in the past few months, is the participation of professional boxers in the Olympic Games. Mendoza made his point and assured that the organizations need to be a part of this, as the WBA has already done.

“The participation of professional boxers in the Olympic Games, by our findings, we definitely won’t be able to go against that flow. It comes from an institution (IOC) which I consider to be one of the strongest of the world sport. So, what I mean is that to avoid or prohibit their participation seems to me an impossible task.

The IOC is going to allow them to participate, as other sports do, but under amateur boxing rules. I think there is a legal issue in prohibiting an athlete from participating in Olympic Games,” he said.

“I invite my colleagues, instead of penalizing, to join forces and put our doctors at their service. I’m sure a lot of professionals would be able to participate if some things were changed in the amateur system,” he said.
The topic sparked a great debate among the audience, who offered their views in support and against participation, always with respect and in pursuit of the best solution to an event that seems imminent for Tokyo 2020.

Mendoza stressed that his opinion is not about demonstrating that he is for or against, but about approaching the IOC and participating, either in support or in detriment. He assured that studies are needed to detect the real dangers and to disclose all the details so that the implementation is made the best possible.

Another topic of debate was the WBA titles of the and the criticisms of some boxing people against the way the oldest organization in the world works, points that Mendoza responded sharply.

“I can answer you in one sentence. Promoters and boxers need them for better income. Many media question it romantically because they want only one champion. You have to keep up with the times to go on improving and give opportunities to everyone.

Promoters gave their point of view. One of them, Ricardo Rizzo, spoke about their necessity and even asked for more, he joked. He stressed that television in the United States asks for titles and these have been good for boxing, for the business and for the sports.

Afterwards, Mendoza returned the question and asked Irusta his opinion about what the president himself called “the multititle”.
he Argentine said it’s difficult to explain them to people, but TV, promoters and boxers ask for titles and that’s why they exist.

Mendoza answered all of Irusta’s questions about today’s boxing in a pleasant conversation that helped clear up many doubts about the discipline. 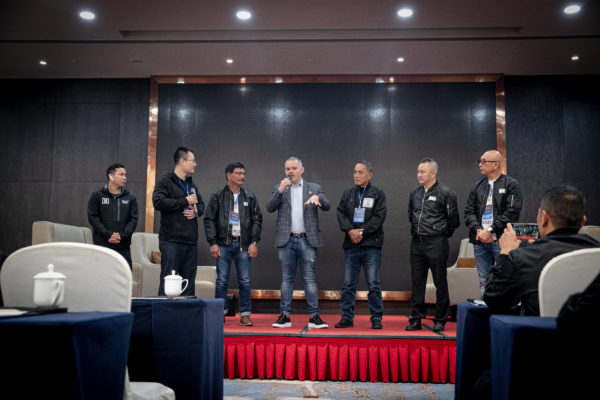