The World Boxing Association (WBA) will be celebrating its 100th anniversary in 2021 and will become the first entity to govern the sport that reaches the century of activity. Although we have a couple of years to go before the WBA’s centenary arrives, there are already plans for such an important event, as President Gilberto Jesus Mendoza told us in his conversation with Argentine journalist Carlos Irusta.

The organization’s projection until 2021 is quite clear and relies on several of the projects it has under development, such as the WBA Academy, the professional and amateur boxing integration, in addition to putting the education of all involved in boxing as a fundamental point for development.

But beyond the action plan, the WBA intends to celebrate its 100 years with important events in all continents, which represents the expansion it has had throughout history.

“We want to make big events to celebrate. One in South America, one in Central America, in North America, Europe and Asia. I never thought I would be at the forefront of all this, so I am very honored. There are already options for several of the venues like Moscow or Kazakhstan, it’s something we’re working on,” Mendoza said.

WBA recognized the trajectory of Carlos Irusta in Fuzhou 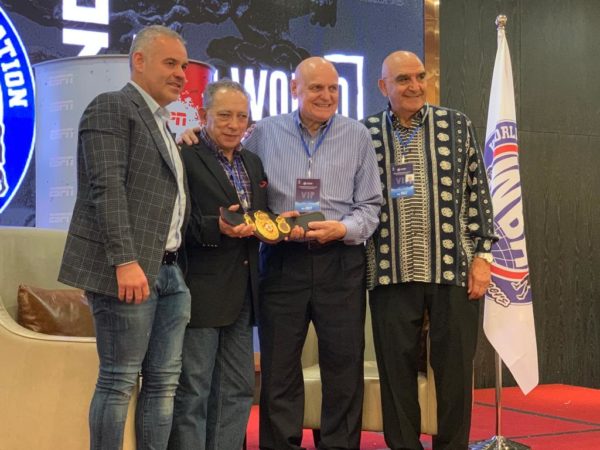