The World Boxing Association (WBA) June ranking lists have been officially published along with the awards for this period, with Gervonta Davis as Boxer of the Month and Naoya Inoue as Honorable Mention.

It was a month with a lot of activity for the pioneer organization, but Davis’ victory over Mario Barrios in Atlanta was especially outstanding. The American scored an 11th round knockout to win the WBA Super Lightweight title from “The Aztec” in an excellent performance on Saturday, June 26th.

Gervonta won a new world title in a new category and continues to prove that he is one of the best fighters in the world.

Meanwhile, on June 19th in Las Vegas, Naoya Inoue left no doubt about his place at the top of the pound-for-pound rankings by dispatching Michael Dasmarinas of the Philippines in just three rounds. The Japanese retained his WBA Bantamweight Super Championship for the fourth time in another remarkable performance.

In addition to the monthly awards, the rankings are also published on the WBA official website and can be checked in the corresponding section. 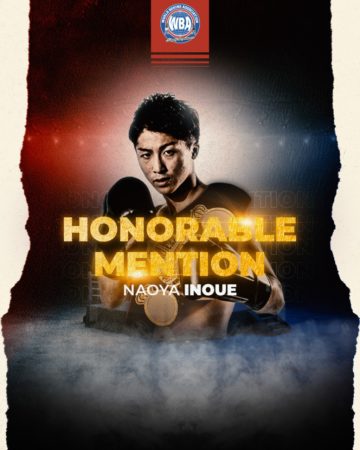