The Welcome Dinner of “Future WBA Champions” in Medellín served to honor boxing legend Sumbu Kalambay, who atended the most important Olympic boxing event in the continent as part of the National Team of Italy where he is part of its coaching staff.

Kalambat, who is a former World Boxing Association Champion, received in the hands of WBA’s President Gilberto Jesús Mendoza his mini belt,in front of more tan 100 athletes and around 30 coaches and trainers from the 10 national delegations participating in the training camp.

“When the Italian National Team arrived, I noticed someone who spoke a bit of Spanish and his face looked familiar. After trying to figure it out, I remembered his face, it was Kalambay. Since I was 15 or 16 years old I used to see his fights and was one of my inspirations. He faced Iran Barkley, Mike McCallum and other great ones, but he knew how to prevail and stand out”, assured Mendoza when he gave the award.

The italian was WBA Champion between 1987 and 1988, during that lapse he had 4 black and gold title defenses, he won his title agianst recognized Iran Barkley in October of 1987, when thet still had to go 15 rounds.

The trainer thanked the WBA for the gesture, and shared some words during the ceremony

Many thanks to everyone. I am very thankful for this and happy to be here with all of you.

WBA feels proud of working again with a champion like Kalambay, a great fighter and trainer who represents the organism’s values. 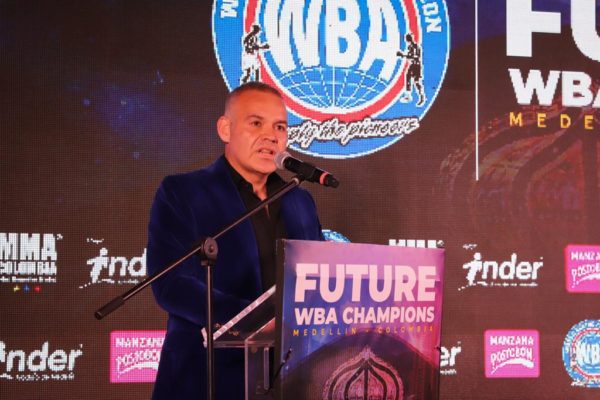