On Wednesday January 29th the press conference to present the upcoming training camp “Future WBA Champions”this conference took place at the Hotel Estelar Milla de Oro, in Medellin, WBA President Gilberto Jesús Mendoza was present, along with FeColBox Top Man Alberto Torres, Olympic Medallist at Rio 2016, Ingrit Valencia, as well as all of the authorities involved in the organization of the best training camp ever seen regarding Olympic Games preparation ever seen in the Continent.

WBA has considered acompanying boxing in its tranformation and fusion pro/am, and this camp will serve to gather more than 110 athletes from America and Europe in one place with the intention of having the necessary competitive level for the maximum sport event in Tokyo. The event will take place from February 1st to the 11th, and it wil count with the presence of the national teams of Venezuela, Colombia, Italy, Ecuador, Uruguay, Puerto Rico, and Argentina, while the confirmation of Uzbekistan National Team, whose athlethes are in process of obtaining their visas in order to join the event.

Mendoza talked about the organism motivation to take place this project and all the expectations expected regarding this event.

“Amateur boxing was always regulated by AIBA, which was created in 1963. World Boxing Association did in 1921, and it had never focused its incursion in both sports fields. Ever since we held whe 2017 convention in Medellin, declared ourselves as a professional and amateur organism, why?, thousands of reasons, Organisms need changes, so do sports. Nowadays, it doesn´t if it is professional or amateur, people love what is going on off the ring, their fighters stories, this is what we try to look for when we say the “Just one Boxing” slogan, stated Mendoza.

About the election of Medellin for this event, he declared that he has admired the way in which sport in the region is being taken aiming on helping those athlets accomplish their goals: “From Medellin we have learned a lot, especially the management model the deparments have, I like a lot the way the federation is being managed. WBA want Ingrit Valencia, and all the ones who have an olympic dream, they can get it through our hands, That is one of the most fundamental things we are looking for here”.

Mendoza declared that one of his dreams is to help a fighter becoming World Champion in the professional field and at the same being the owner of an oympic medal. WBA President enfasiced tha he would prefer that milestone would be accomplished by a colombian, venezuelan, or a panamanian, countries that have given a lot the the organism.

On he other hand, Ingri Valencia vas very motivated by the opportunity to participate in the camp along with the Colombian National Team, and be able to run into high-level fighters in the amateur, as well as the proffessional championsm such as Argentina’s Yessica Bopp, who will also take place in the competition.

Regarding Colombia National Team, which is currently in Bogotá, Torres expressed the group’s immediate plans: “we come to this camp with the whole group that is in Bogotá. Headliners and Substitutes will come to look for the best preparation possible. We hace the toold to achieve great things and the intention is to get as many olympic spots as possible.

Erick Cogollo, who is Inder represantative, an organization that works hand in hand wih WBA to arrange the bes venues at the event, spoke abou the available infrastrcucture. He also stressed being very motivated by WBA projecs such as “Ko to Drugs” and wants to undertake more projects in alongside the pioneer sanctioning body.

Another important presence was Damian Martinez, who is the MMA Colombia Gym Sports Director, which will provide its facilities hosting where all National teams will gather.

“Future WBA Champions” training camp is the most ambitious and complete ever seen in the continent. WBA will fulfill a gigantic project that has the sole objective of making Olympic World Boxing better and better.

Nacho joins the "Future WBA Champions" for the Olympic dream 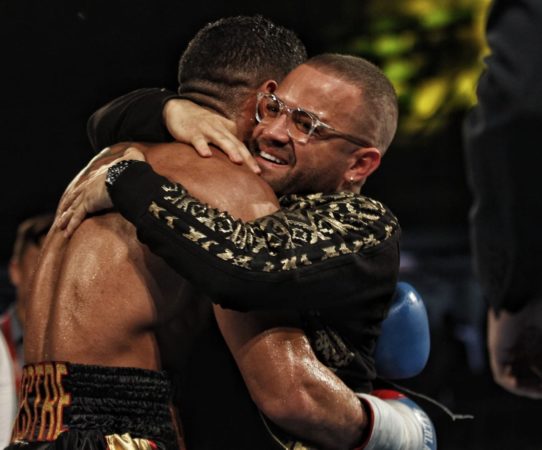