The World Boxing Association began its Directorate two-day meeting, taking place at the Santo Domingo Sheraton Hotel, prior to the XXIX KO to drugs of June 28, 2014.

Gilberto Jesus Mendoza checked the quórum and read the WBA Creed, as it is customary in these meetings.

The agenda scheduled for the first block the review of the different regional bodies and also the Lima 2013 Convention Minute, but it was partially altered to present of several awards.

The first was presented to Doctor Ramon Pina Acevedo. “A Dominican boxing figure. “He was supervisor of the Ali vs Frazer fight in Manila, and beyond boxing, he devoted his life to the laws where it has been successful”, said Jesús Gilberto Mendoza, Executive Vice President of the WBA.

Dr. Pina Acevedo thanked attention said “I feel like I did a long time ago, when I was the Senior Vice President, Member of the Executive and member of the Legislative Committee. Perform my duties within this noble institution diligently.”

Also a special recognition to Mr. Felipe Solano, former Minister of sport of Dominican Republic, , “who is also a boxing fan and a great supporter of the sport in general”.

WBA Executive Vice President Gilberto Jesus Mendoza was granted an Honorary Doctorate from the University of Mongolia. The recognitio was presented by the WBA-PABA president Yang Sup Shim. 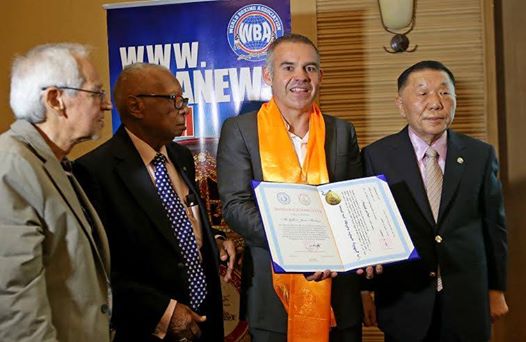