The first activity of the day was a visit to the National Palace of Mexico, in which the guides accompanied Mr. Mendoza and Ruiz through all the areas while they related different events from the history of Mexico and honored the memory of Benito Juárez. The president of the WBA was delighted by the paintings of legendary muralist Diego Rivera.

President Mendoza and Ruiz spoke to the press and the champion was acclaimed by those present, took photographs and signed autographs. Among the questions, there was one particularly interesting and it was for Andy Ruiz, whom they consulted if he would be willing to participate in an Olympic Games. The first Mexican Heavyweight World Champion in history said it would be a nice experience, but that he is focused on his rematch against Anthony Joshua at the moment. Mendoza said that the organization is willing to give permission if he wishes to participate in such an event.

After the guided tour, it was time to meet the President of Mexico. Mendoza gave President AMLO an edition of the Complete Works of Venezuelan writer Rómulo Gallegos and a replica of the WBA belt.

In the meeting between Ruiz, López Obrador and Mendoza, the champion was decorated and thanked for representing the colors of the Mexican flag with so much pride, and for representing the oldest sanctioning body in the world, the WBA. They also talked about different projects for boxing in Mexico and the development of their boxers.

Once the productive meeting with the President was over, Mendoza went to TV Azteca to participate in an interview and a press conference. President Gilberto Mendoza thanked the welcome of the Mexican people and highlighted Andy Ruiz’ courage, a great champion that the WBA is very proud to have in its ranks.

Andy Ruiz received as a hero in Mexico 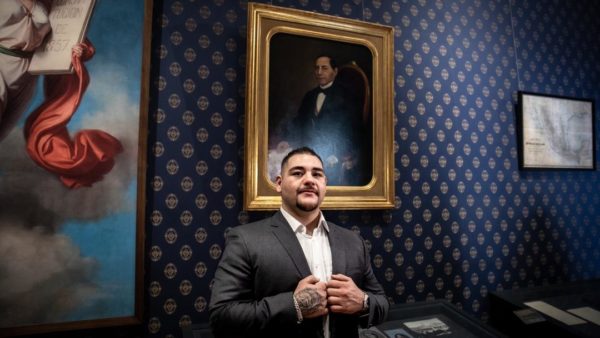