Two weeks ago, Andy Ruiz was a boxer among the many Mexicans who stand out in the world. But after his knockout against Anthony Joshua to become the first heavyweight champion in Mexican history and capturing the Super WBA Champion’s belt, he has been received in his country as a national hero.

Several tributes have been received by the champion, who in one of the activities carried out this week arrived at the National Palace of Mexico for a guided tour and a meeting with the President of the Republic, Andres Manuel Lopez Obrador.

Despite being born in California, the Mexican blood that runs through the veins of Ruiz makes him another of its champions. Ruiz went to his country to meet the fans and the press and spoke about how he feels after the great feat he achieved last week in New York against Anthony Joshua, in addition to what has been his career.

“I am happy. A year ago I wanted to leave
Boxing. I had no money, but I did not want to live on the street,” Ruiz said of his situation.

As in all areas of life, you always need discipline and confidence to reach greatness. Although in his youth he faltered several times, his father pushed him to remain in boxing and that led him here, to this historic moment.

“I was doing bad things with friends. Doing things where my dad had to look for me in their homes and take me to train. But boxing helped me not to be in the streets or in bad areas. I am what I am thanks to boxing and my dad,” said the recent champion.

Raised with great values, the “Destroyer”, as he is nicknamed, said that the most important thing is to help the family, saying about his personal plans: “I told my mom that we were not going to fight anymore. I told her that I was going to give her everything. That I am going to pay for everything, buy her a new car. Thank God everything changed.”

“I was nervous with the president. He was very proud. You can talk to him like an uncle, a relative,” he clarified.

Ruiz owns three of the four belts of the big organizations. He only has to capture the one that Deontay Wilder has and the Mexican said that he wants to challenge him. “First I must do the rematch (against Joshua). Wilder is a good fighter, he hits hard. But step by step. One fight after another.”

Ruiz commented on other important issues such as Bullying, which he suffered in his childhood. He advised boys not to be knocked down and said that he is very happy to have achieved something that nobody thought possible.

Mendoza meets with Sulaiman in Mexico 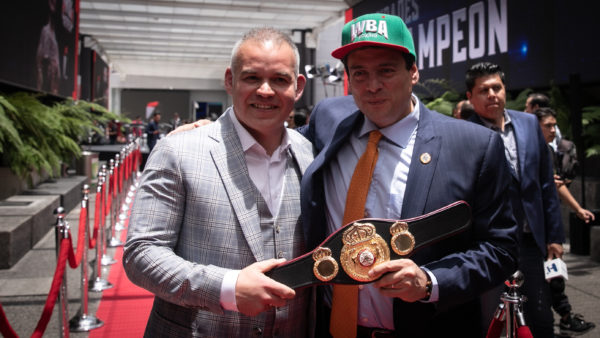