Puerto Colombia will heat up on Thursday with 16 fights at “Maratón Boxística”. The event, which has the support of the World Boxing Association (WBA), will be held at Club Kilymandiaro and will feature “Captain” Gabriel Maestre in the main fight against Mexican veteran Daniel Vega.

The Venezuelan will make his third professional fight and stopped the scale at 151.3 pounds, while Vega hit the scales at 150.2 pounds for the fight that was agreed at 152 pounds.

“I am excited to return to the ring and I want to put on a great show in Puerto Colombia. I have always said that my goal is the world title and a victory will help me take another step forward on that path,” said the undefeated boxer.

Among the 16 fights that will take place in Colombia this Thursday throughout the day, there are several worth paying attention to.

Colombian José Sanmartín, who also aims for great things in the short term, hit the scales at 122.2 pounds for his fight against Mexican Ricardo Roman, who stopped it at 122.8 pounds. The fight will be at 124 pounds and will be the co-main fight of the event.

Another great prospect to keep in mind is Rodrigo Caraballo, who will go on to a new challenge after a great victory in Saudi Arabia last year. The Venezuelan lightweight weighed 133.2 pounds for his fight against Mexican Henerto Pérsico, who weighed 137.3 pounds. The parties reached an agreement to fight.

The world championship fight scheduled to be the main fight was not approved. The Light Flyweight champion, Carlos Cañizales, stopped the scale at 106.8 pounds, within the 108-pound limit, but his Mexican challenger, Jesús Silvestre, failed to make the weight.

The fights will be broadcast via the World Boxing Association’s official YouTube channel. 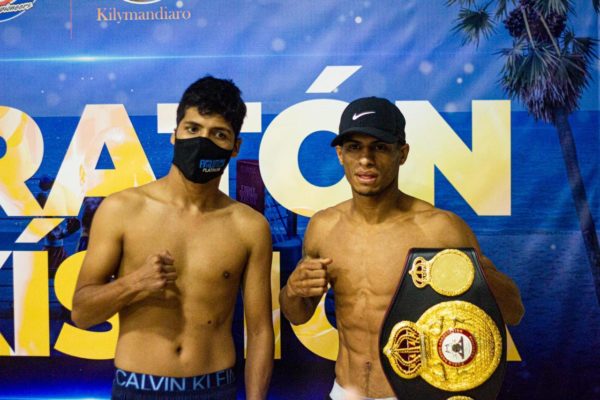