“Boxing is for men, and is about men, and is men. A lost art of masculinity all the more trenchant for being lost.”—Joyce Carol Oates (On Boxing)

There are many father-son acts in boxing. From the beginning of time, fathers, surrogate fathers, and concerned male citizens introduced their sons and male charges to the manly art. Sometimes it was futile. Other times, the times we remember best, it led to fame and riches.

Most father-son acts take place in the gym. The timeless oral tradition of the classical arts is how the knowledge is passed from one generation to another. It is how fighters learn to box. The father/trainer reveals the ins and outs, the ups and downs, the essentials of a sport that is “serious, complete, and of a certain magnitude”—Aristotle’s definition of tragedy.

A sport which celebrates male culture naturally draws men to its ranks. Few women have more than a passing interest. If one looks hard enough, there’s a female promoter here, a female referee there, a woman manager, a female ringside physician, an occasional female corner-person. There is a place for women in boxing, however peripheral. But even women’s boxing, which is sometimes superb, has failed to catch on with the public at large, flying as it does in the face of convention, social norms, propriety and expectations.

One father-daughter team has made it work.

Dr. Calvin Inalsingh, from Trinidad-Tobago, is a medical doctor and sports medicine practitioner. He is Chairman of the Medical Advisory Committee and part of the WBA Directorate. His daughter, Shivana Inalsigh, is a Clinical Research Reflexologist and Lifestyle Medicine and Wellness Coach. She, too, is on the Medical Advisory Committee and was currently Director of the WBA Female Championships Committee.

Their concerns are identical. Their focus is the fighter and his or her physical and mental health.

“We try to protect the boxer as much as possible,” Dr. Inalsingh said. “Outside the ring to educate him or her to know what to do, how to get fit, and how to recover from injuries and when they’re in the ring, we want to educate the referee, the trainers, and the ringside physicians what to look out for. That’s the essential thing, because it can result in a power knockout which can be avoided.

“Many times a boxer would have a head injury, but nobody knows that. But if their parents or their friends know what to look out for, a parent, a friend or a relative can take the boxer to the hospital. And if he gets there in time, it might help a little bit.”

A little bit of help is better than no help at all.

In boxing the knockout is the ultimate. It’s the grand slam in baseball, sudden death overtime, a hole in one in golf. But boxing is boxing. Boxing is different. It is fundamental. It is complex. Boxing is dangerous.

Dr. Inalsingh is aware of boxing’s dangers. He is a professional in a profession which questions boxing’s relevance. When a fatality occurs, groups like the AMA (American Medical Association) call for a ban on boxing. In a perfect world, they might get their wish. But in the real world, in our world, it’s not happening. Banning boxing is like banning air or water. It’s like banning music or the sun. Boxing preceded us. Boxing will be here when we’re gone. It’s not going anywhere. Dr. Inalsigh opposes prohibition, in fact and principle. He does not want boxing banned, but he empathizes with its detractors.

“I spoke with somebody who they called a Bad John in Trinidad. That is the local word for a bad man or gangster. He’s a bad man. We went into conversation and I realize that he’s a changed man now. I asked him, ‘What made you change?’ The man said that when he was young and walking down the street and he saw someone he would beat them if he did not like them. If he had a good pair of shoes, he will beat him and take it. If they have ice cream he will take it and eat it. He thought that was the right thing then but didn’t think so anymore.”

“And then later on I met Mike Tyson,” he said. “He told me the same thing. Mike Tyson was saying he would beat somebody to take a shoe, but he said, ‘I don’t know why I do that.’ But I feel I know why—because he didn’t have a family life. He didn’t know good from bad.”

With a nod to Sigmund Freud, Dr. Inalsingh elaborated.

“I thought about it and I said this is important to know because they came from the same environment. It’s just like an animal. The ego is there, but there’s no superego. When you’re born you have an ego and if you want to live you have to eat and if you want to eat you have to hunt. It’s where the superego comes in. ‘Don’t do this. Go to school. Follow the rules. Learn something and that helps somebody.’ That’s using the superego instead of the ego alone. You’re trained to have a superego, and the superego tells you, ‘This is correct. This is not correct.’ So your life changes right away. So I feel that two people who spoke to me, they were at the animal instinct when they were doing that. They didn’t have parents. They didn’t have school. They didn’t have a mentor. When Tyson got a mentor he changed. I know he changed.”

As complex as boxing is, from both a physical and psychological standpoint, it’s where people can channel their aggression in a socially acceptable way.

“It brings people out to better themselves and that’s very good,” said Dr. Inalsingh, “because you’re directing the energy of people who don’t know where to go. You catch them as a youth and you train them. Everybody doesn’t like to fight, and there are problems in society, but I think boxing brings out the talent and helps society in general. You can bring somebody from the gutter out—and that’s where boxing comes in very handy.”

Dr. Inalsingh’s daughter, Shivana Inalsingh, is no less intelligent than her father. She comes from a dissimilar field, but they have similar concerns.

“I think she knows about boxing because she grew up with me,” he said about Shivana. “It’s good to know that a non-medical person knows something which is medical. If the refs and judges get the knowledge, they can help tremendously. So it’s good to know for my daughter.”

In a man’s world, Shivana Inalsingh more than holds her own.

“I’m here with my father,” she said when we met in Panama. “I’m a member of the WBA Directorate and I’m on the Medical Advisory Committee. We look at the practices that can improve this sport by bringing in different practitioners and different stakeholders who can identify areas in need of development and come up with solutions.

“We’re looking at various things to integrate inside and outside the ring. We’re looking at boxers and different situations. Some of it is focused on environment and others relate to important  aspects of weight management, what things need to be changed in the sort, what things we need to address, or at least pay attention to, because we have to be responsive to things that are happening in the sport.”

I asked Shivana what she would say to those who want to ban boxing.

“So what is the quality of life they’re going to enjoy after they retire?”

I asked about her method.

Shivana said, “The past president Mendoza really recognized that need of shifting the perspective of this sport and focus of this sport and place more attention on the boxer who if they weren’t here, we wouldn’t be here. I think it’s important and I’m glad I’ve been given the opportunity to be one of the first people involved in that holistic background who’s been part of the World Boxing Association. It’s an important step because we need to educate not only the coaches and discuss things among the executive members, but also educate the boxers how they can protect themselves when they enter the ring.”

Boxing is a hurt business.

“That’s a fact of the sport but we’re making important strides,” said Shivana. “Compared with MMA and other contact sports, boxing is the ballet of combat sports. You really do need a high level of fitness, and it’s that level of fitness that’s going to get you to the next level. So I think it’s important that we’re able to address these needs and recognize that there are other sports that are just as dangerous, maybe more so, but we have to do our best to insure that we protect the health and safety of the boxer.

Recently appointed as Director of the WBA Female Championships Committee, Inalsingh said, “It is my intention that the sport be recognized for the empowerment and real opportunity for equality that it also brings to women.”

I mention that boxing, like life, is full of contradictions.

“It is true,” she said, “but maybe with a shift in consciousness, boxing may change. You never know. We have more rules and regulations that have been implemented to deal with the changes compared with a hundred years ago when there was nothing in place. So we’ve had a big transformation in terms of this sport. I just think we need to focus more on uplifting the athletes and allowing them to recognize that not only are we looking at what’s happening inside the ring, we have to pay attention to what’s happening outside of the ring. That’s why it’s important that ringside physicians are certified, so they can observe signs of distress. It’s important for referees to know signs of a concussion. An early stoppage could save a life. We need to have more ringside officials operating at a higher level.

“Every person involved in the sport needs to raise their level of skill. And when everybody moves up—guess what?—the sport improves. It really becomes a holistic sport, because you’re looking at mind, body, and spirit, with everyone working in a dynamic harmony that’s going to elevate not only this sport, but the athlete themselves.” 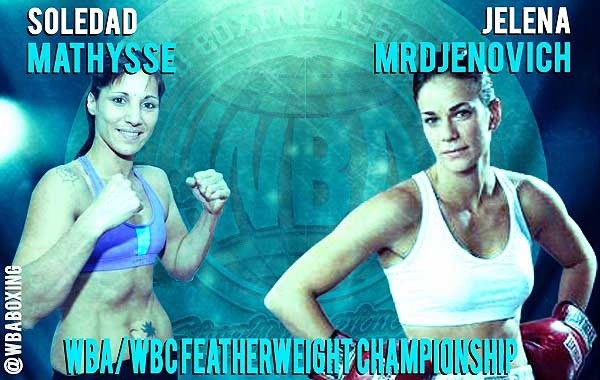