By June 8th 2013, the so-called ‘American Dream’, Cuban Erislandy Lara (25-3, 14 KO’s), would conquer his first crown. On that occasion he dominated Mexican Alfredo ‘El Perro’ Angulo via 10th round technical knockout to become the interim title holder at 154 pounds of the WBA in a fight held in Carson, California.

After his first crown, the fighter from Guantanamo remained a champion for about 5 years on a trip that allowed him to position himself as a regular champion and then be raised to super champion.

Lara’s illustrious career is due in part to his technique and seasoning in the Olympic ranks but also did in part to the quality of the rivals he has faced in the professional field. Those names include Austin Trout, Saul Alvarez, Ishe Smith, Brian Castano, Jarrett Hurd, Yuri Foreman, Vanes Martirosyan, and Delvin Rodriguez, among others.

This Saturday Lara will have the opportunity to reign for the second time in the super welterweight class. This time he will be fighting a Mexican once again and his rival bears the surname Alvarez, but it is not Canelo in front of him this time but Canelo’s brother Ramon.

Ramon Alvarez (28-7, 16 KO’s) is the brother of Saul Alvarez – the only Mexican who has defeated the Cuban, and Ramon will have the chance to do it himself this Saturday when they get into the ring at the Minneapolis Armory of Minnesota, which has a maximum capacity for 8,400 fans.

The evening that brings the rivalry between Mexico and Cuba together is presented by the Warriors Boxing company of the promoter Leon Margules, in a Fox Sports USA broadcast.

Lomachenko and Campbell face to face at press conference in London 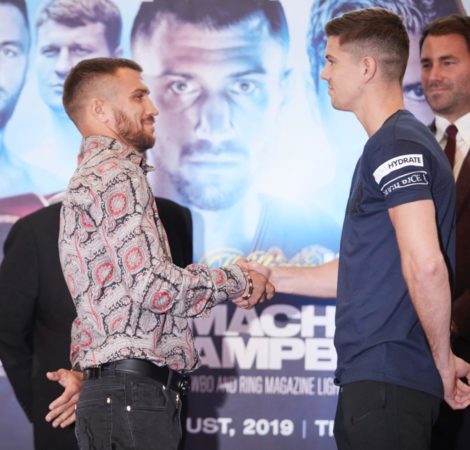