Roberto “Hands of Stone” Duran attended the press conference held at the DNCD in Santo Domingo, Dominican Republic, headquarters of the XXIX KO Drugs, to be held this Saturday, June 28, 2014 at the Sheraton Hotel and that will have as the main fight for the WBA interim lightweight title battle.

Colombian Darleys Pérez and Dominican Argenis López are the title fight stars, and they both stated to be ready for the weigh in this Friday.

“I thank God for being here, and the WBA for the opportunity. I am motivated and ready to win. I think that everything will be OK,” were the first words of the Colombian Pérez, who has professional record of 29-1, 19 KO´s.

On his opponent, he said that he had seen his fights, “he is a good boy, is coming up and is ready to give a big fight, as I am. He has talent and is willing too.”

López, who risks his unbeaten record after 19 victories, said “Darkeys is a great boxer, has experience and is very good. I’m good, and good boxers must fight with good boxers, that is why we are going to fight this Saturday”.

He also said he is happy because this event is being held in Dominican land, “I thank God for the opportunity. I have suffered, cried and worked a lot for this opportunity. On Saturday, with God blessing, I will be the winner and exit through the big door,” said “El Caballo” Lopez.

For his part, Duran stressed the importance of this kind of events and support for the sport, “Especially to boxing because it whoever it hurts this is the sport that gives more glory to their countries, and making them known.”

He made urged fans, ” to go and see fights, support the event. It is important to support boxing. “This is a country of baseball, but I tell you something, where boxing gets, the ball does not.”

The invitation made by Duran was supported by the organizers of the event, Bélgica Peña and Carlos Zapata. Both stressed the parity of the fighting, and claimed to be a true feast for the Dominican fans.

Major General Julio César Cifron Velazquez, General director of Drug Control hosted the meeting with the media. He praised publicly the organization and the WBA “for such initiatives. We must fight against drugs. It is a real privilege for us, we exalt sporting values and one of the best ways to do so is boxing,” he concluded. 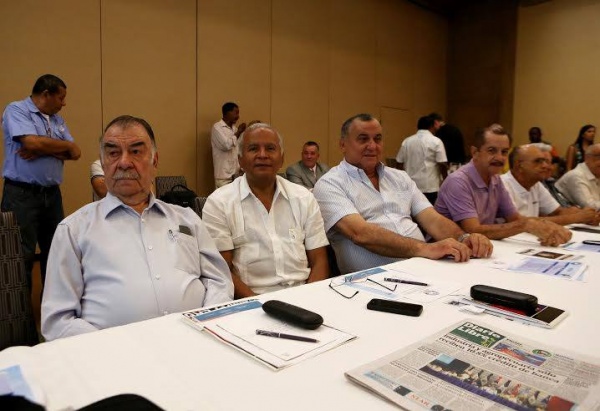