Gervonta Davis nearly had a setback this Friday at the weigh-in ceremony in Carson, California, but in the end he made weight, coming in at 129.8 pounds in the face of his first defense of the Super Featherweight Super World Championship of the World Boxing Association (WBA) against the Mexican contender Hugo ‘Cuatito’ Ruiz, who came in at 129.5 pounds.

After Hugo beat the scales on his first attempt, Gervonta climbed on the scale for the first time and came in at 130.4 pounds and then without clothes registered 130.2 pounds before taking a break to sweat more off and returning 30 minutes later to finally register the 129.8 pounds that are within the 130 required.

The problems of the champion to make the weight made the combination more interesting in the main event of the Showtime card, because for many the chances of victory for the challenger Ruiz have increased despite having been called at the last minute due to detached retina of Abner Mares.

Davis, who won the championship against Cuellar in April of last year, will come into the fight with a professional record of 20-0 and 19 knockouts, while “Cuatito” Ruiz, who recently defeated Sinaloa’s Alberto Guevara on January 19th in Las Vegas, will come holding a record of 39-4 with 33 knockouts.

Machado is the favorite to keep regin the division 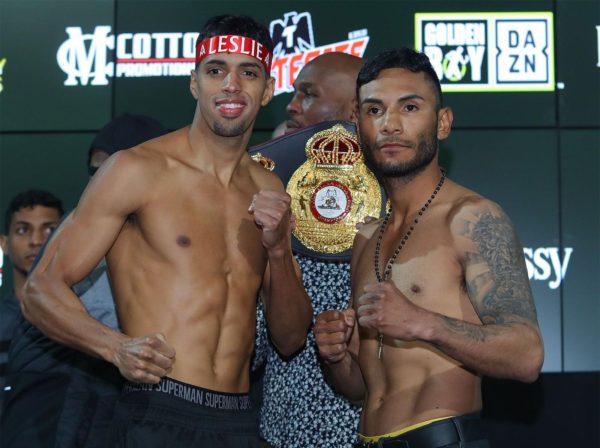