Venezuelan Carlos Cañizales successfully defended his World Boxing Association (WBA) World Light Flyweight Title while moving his record to 21-0-1 via scoring his 17th stoppage victory in the twelfth and final round against the very game but inexperienced Bin Lu.

The fight took place on the Pacquiao-Matthysse card in Kuala Lumpur, Malaysia, and was promoted by Manny Pacquiao (MP) Promotions and Oscar De La Hoya of Golden Boy Promotions while being streamed via ESPN+.

The fight was a very good one, with Cañizales catching Lu with overhand rights that were snapping the green professionals head back in the very first round as he established his superiority.  The overhand right would be the best of the punch of the fight, with Lu looking to try and box the champion when he realized that he could not stand and trade with him.

Lu was trying to be the matador to the bull, but it wasn’t quite working to his favor as he was not throwing combinations and you could see the inexperience seeping through.  Cañizales continued to turn up the heat on Lu, who was starting to look pretty weary in the ninth round from all the bodywork and the heavy hands of the champion.

In the eleventh round, Lu was bleeding from his right eye and was knocked down from a left hook right-hand combination that was ruled a knockdown due to him holding onto the ropes as he was going down.  Lu was trying his best to win in the championship rounds, coming out aggressive to start the twelfth and final round but Cañizales immediately took the round over, landing bombs and scoring a knockdown and knockout win in the final round.

It was a great victory for the champion as it showed that he has many dimensions to his game.  Lu suffered a knockout loss that puts his record at 1-1, but he will no doubt be back as he had a very good showing considering it was only his second professional fight.

Pacquiao Wins a Thriller in Malaysia 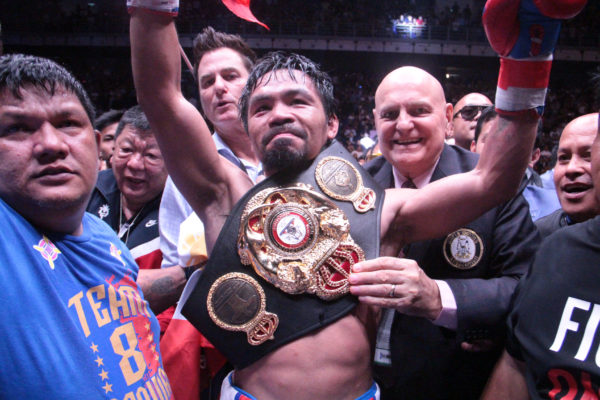