Billy Joe Saunders is a very particular boxer. He starts fighting even before stepping into the ring and knows what to do from the physical point of view but also from the psychological one to achieve victories; that’s why he presents himself as a great challenger for Saul “Canelo” Alvarez in the battle for the World Boxing Association (WBA) Super Middleweight Super Championship this Saturday, at the AT&T Stadium, in Arlington, Texas.

He is the WBO champion and will try to seize the WBA and WBC belts from the Mexican. For years, the acronym “BJS” has been making noise in the boxing world. He knows how to play with his opponents’ minds, he generates controversy, he knows how to heat up fights and then he shows a very technical boxing in the ring, combined with his southpaw condition and the use of many tools to prevail in each of his fights.

For weeks now, Saunders’ behavior has been the same as in previous fights. He has tried to create controversy, make different comments to the press and little by little penetrate the mind of his rival while influencing public opinion. Since he stepped foot in Texas he made his presence felt, first he missed the first event organized by Matchroom Boxing, in which the press could only talk to “Canelo”, and also asked to increase the size of the ring that was arranged for the fight.

The 31-year-old Briton doesn’t need any of that, as his boxing style has spoken for him over the years, but he knows it’s a plus to enter the ring with certain mental advantage over his opponent and dominate in a very important area. He has advantage in height and reach over Canelo, he knows how to walk the ring well, use his punches with precision and frustrate his opponents, things he is going to try to impose against the best pound-for-pound fighter today.

In the sport’s commercial environment and to casual fans he may be a bit unknown, but those who know know better are aware of the magnitude of the challenge Alvarez is facing. BJS has been making his presence felt since the week began and will surely know how to make his mark in each of the events leading up to the weigh-in ceremony. Chances are that on Saturday night everyone will remember his name even if he ends up defeated.

Canelo: the big name in the boxing world 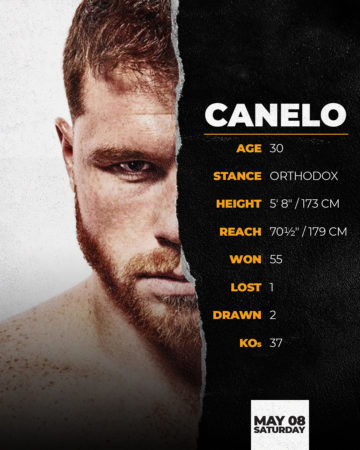