Ismael Barroso showed that at 36 he is still a fearsome boxer for any of the best in the weight division. Although he was not a favorite on Thursday night in Costa Mesa, California, the Venezuelan managed to comfortably dominate the Canadian Yves Ulysse Jr. and snatch the Super Lightweight Gold Championship of the World Boxing Association (WBA).

The judges scored 117-111, 115-113 and 115-113 to give the southpaw the unanimous decision, as he threw more than 900 punches in a fight in which he was very aggressive and almost always led with initiative.

True to his style, the “Tiger” threw power shots from the start on Ulysse Jr., who waited and studied his rival from whom he knew the power and danger involved.

While the hitherto champion calculated the fight, Barroso was adding rounds thanks to his aggressiveness and a greater amount of connected blows to the Canadian’s face.

Although in the middle rounds Barroso lowered the pace, Ulysse Jr. did not have the possibility to take great advantage of that, since the danger of the Venezuelans left hand remained imminent. Although the man from Canada tried to hurt a slightly tired Barroso, he failed to do so and found himself with good impacts from the harder puncher in the exchanges.

Despite being up on the cards, Barroso did not want to leave any doubts and got a second wind in the final three rounds, in which he continued to throw many punches in combinations and could put his left hand several times on the face of his opponent.

The South American won the 22nd fight of his career, while he has 3 losses and 2 draws while winning 20 fights by knockout. Meanwhile, Ulysse Jr. now has a record of 18 wins, 2 losses and 9 wins via knockout. 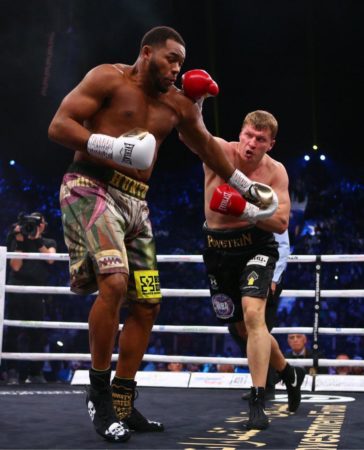