The “99 Years of WBA History” forum has been one of the most important among those organized for the Online Convention of the pioneering organization. Gilberto Mendoza, President of the WBA, joined Don King and Bob Arum, the two most important promoters in the sport history, in a great talk about the organization and boxing in general.

King worked with several great fighters in history and is still an important figure. He congratulated the WBA for reaching 99 years and talked about his beginning, the racial challenges, his relationship with the WBA and the fights he has organized during his long career.

“I started boxing because Muhammad Ali called me when he was out of his exile. He asked me to help him. I started with him. I used to go to his fights and that’s how I got into the boxing world,” King said.

The famous promoter remembered Gilberto Mendoza’s father and how he used to work: “Gilberto Mendoza Sr. always kept his word. Maybe the situation was not appropriate, but Gilberto worked with his whole team to keep his word.”

These two legendary promoters had their rivalry in the past and talked about it and how it helped them improve. On that matter, Arum highlighted that the competition was positive for boxing.

“Competing in the way King and I did helped us be better promoters,” said the Top Rank President.

Boxing is going through a difficult time due to the pandemic. Arum talked about what it is like to organize fights under this circumstance and how good it feels to do a part for the sport’s recovery. However, he assured it is not easy. “To promote boxing in this pandemic means you’re not sleeping at night,” he said.

The forum had enough time for everything. They also talked about their current political point of views and their differences, based on personal respect.

The WBA is proud of joining these two legendary figures to talk about the boxing history and everything that has characterized the WBA from the beginning.

WBA and AIBA announce an agreement for world boxing 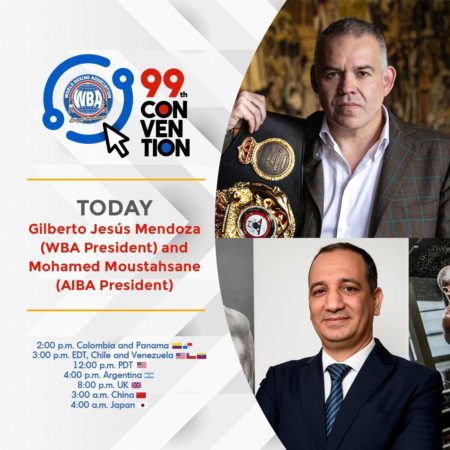