The final press conference took place for World Boxing Association (WBA) Super World Heavyweight Champion Anthony Joshua vs Mexican-American native Andy Ruiz this Saturday. President of the WBA Gilberto Mendoza was on hand at the presser, to stress the important of the fight and the historical black and gold belt.

The fight will take place at Madison Square Garden in New York and will be broadcast live on DAZN. It will be Joshua’s first fight on American soil. All the important titles will be at stake, but it is important to note that all three title fights for the night will feature WBA titles.

Challenger Andy Ruiz stepped up to the podium first. He is coming into fight on late notice as the original opponent Jarrell “Big Baby” Miller fell out due to failed drug testing.

“I respect Anthony Joshua as a man and a fighter and I am a fan of his,” said Ruiz, who further stated “On fight night there will be no respect in the ring and I will be no fan or friend of his.”

Ruiz is sure of victory, claiming that “On June 1st the belts are coming back with me to Mexico. They have never been there before but they will be. We are going to win this for Mexico. Viva Mexico!”

Champion Anthony Joshua is coming into the fight having not fought since last September when he clashed with Alexander Povetkin at Wembley Stadium in front of nearly 80,000 fans. Now, Joshua is fighting in the United States for the first time and at the mythical Madison Square Garden, “The Mecca of Boxing”.

“I am not overlooking Andy at all,” said Joshua at the presser, “He is just as dangerous as Deontay Wilder or Tyson Fury because he has his own special skill set so I take him deadly serious.”

Joshua knows all too well that he is the moneymaker in the division and that everyone is chasing him. He was humble about his status, however, saying “Right now I am only champion until June 1st, because that is when I have to defend my title. June 1st I put my titles up, they are up for grabs, and may the best man win.” 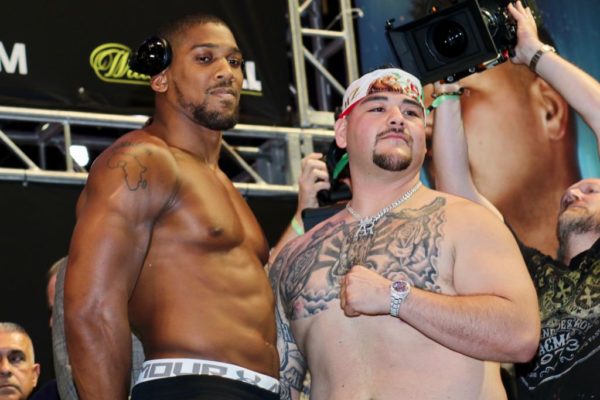