Since the so-called ‘renaissance’ of the heavyweights after Tyson Fury’s victory over the then undisputed champion Wladimir Klitschko in 2015, there had never been such a great a surprise in boxing’s top division like the one seen on June 1st, 2019, when Mexico’s Andy Ruiz Jr. knocked out the unified king, Anthony “AJ” Joshua.

That night changed, as fate would have it, the life of Andrés Ponce Ruiz Jr, ‘El Destroyer’, of Mexican descent, as he became the first Mexican to win titles in boxing’s top division.

His height of 1.88 meters and average weight of 283 pounds seem to lose lethality when he smiles, a characteristic feature of a man who saw his dream come true by earning the championships, a goal he first set for himself as an amateur boxer, but was cut short in the 2008 Beijing Olympics when Robert Alonso and Oscar Rivas imposed on his dream of an Olympic medal.

That June night changed the life of the now former champion. Although, according to his family, Andy had always been a “calm and happy person because he could live from his favorite profession”, he was criticized by his family when his father pointed to him as the sole author of his defeat in the direct rematch against Joshua.

“He was never really focused. I would tell him to work, that he shouldn’t get that much weight because he would not do anything to Joshua. He never prepared, there was too much celebration”, admitted Ruiz Sr.

An atmosphere of flattery developed around Ruiz, which eventually led the Mexican to lose the titles in his mandatory defense. Praises from all angles made him lose his way and, as a consequence, the belts.

“I didn’t train as I should have, I gained a lot of weight and changed my mentality”, admitted Andy Ruiz Jr. with his head down after learning the results of the cards.

Ruiz has always been criticized for his physical build, so this shower of criticism of his obesity has been the driving force behind the fists that make him a star today. His Aztec ancestors’ origins forged his character as well as his upbringing in Imperial, California, a gang county 10 miles from the Mexican border.

Since his childhood, he found in the ring a definitive alternative to fight the wrong steps and the drugs around him. He made his amateur debut at the age of six and this was his first major test, as he could not find opponents of his age, and he was forced to take on older and more experienced opponents.

That child, somehow, lives inside him and comes out in every smile and the infallible ritual of eating a Snickers bar before entering the ring to fight.

He achieved an amateur record of 105-5 under the tutelage of trainer Armando Ferrer. Despite the victories, there was a steady stream of mood swings that emerged many years later in 2016, when he lost his undefeated record in a close decision against New Zealand’s Joseph Parker. Losing led him to a retirement that was interrupted in 2018, when he returned to the path of victory.

He came back like the greats and, after changing his luck, now he also lives ‘in a big way’. He has proclaimed himself a car fanatic and the monies he has earned from his championship fights have been invested in cars such as Rolls Royce, Lamborghini and Mercedes-Benz, as well as supporting his family unconditionally.

In his intimate life, Ruiz traded the traditional Burrito at Johnny’s Burritos for the most expensive restaurants anywhere in the world. He also changed the mentality of millions around the planet. Once Manny Robles, his former trainer, claimed that “nobody believed in him because of those extra kilos”, but the K.O. that changed his life, also knocked out the criticism and mockery of obese society throughout humanity. 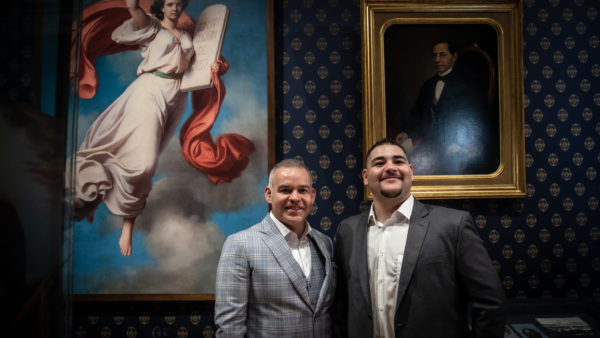