For the first time after a long time, the ring was far away. The fighters were just two giant ants fighting with bites to delight the audience. My seat was chair 236 row 29, it was on the top, almost against the wall of the stands of the legendary Wembley Stadium in London, England.

Without noticing, I had acquired the best seat of all, the one that really offers great privileges: to enjoy, with no barriers, a great boxing evening. I could think that I lost “my right” to interview the protagonists, or to be next to the ring so the ants would become mastodons, I would turn to my left and see some movie star and to the right some former champion.

But not in this row. Here there’s only a large black cloth covering those seats that are not available and the other people are fans drinking liters and liters of beer, and they are shouting out the name of Anthony Joshua and demanding a worthy knockout for the heavyweight class against his rival, the Russian Alexander Povetkin.

Here, sitting in the cheapest seats – barely 40 pounds sterling – we found “the flavor,” as we Latin people say: everybody dances, jumps and smokes secretly. Suddenly, everything trembled, the audience heard the first notes of “Sweet Caroline” by Neil Diamond, and they started singing: “Sweet Caroline/good times never seemed so good (…) oh, oh, oh!”, while raising their beers. They all know that the great moment is about to start.

After whistling Povetkin, that’s how the fans ended singing “ooh, Anthony Joshua!”, while the boy of the film step into the ring, giving the lead role to Michael Buffer only for a few minutes, and with his battle cry: “Let’s get ready to rumble!” the curtain of the preliminary acts falls and the great battle everyone has come to see finally starts.

British fans had confidence that the English boxer would have a quick victory over the Russian opponent, but the first beats of the fight worried the attendees. Povetkin, despite his smaller height and reach, managed to punch Joshua, who was looking for the proper distance to carry out his fight strategy.

As rounds passed by, the atmosphere became cold. Only a “fuck!” was heard in the stadium when the fifth round ended. At the beginning of the sixth chapter, a robust man wearing a white shirt and with a surly expression shouted: “the right, the upper …,” he stood up, sat down, stood up again, he grabbed his head, gaped and stared at infinity. Then, the bell rang indicating the end of that round and he shook his head repeatedly.

But in the seventh round, the lucky one, the stress became jubilation. “AJ” started like a whirlwind, he punched Povetkin and the Russian staggered, the robust man stood up as if driven by a spring, hugged his friend, waited for the fall and celebrated right in the middle of the assault, when Joshua’s left hook hit the Russian and finished him with his right sending him to the canvas. The referee did the protection count, while every fan, with their hands on their heads, asked a superior being to keep the man from Eastern Europe on the ground. It was not possible. But that superior being named Anthony Joshua, just a few seconds later, acted like a lion after his prey to end the confrontation. Povetkin fell again. The referee declared the knockout and the audience roared. Finally, that robust man wearing the white shirt changed his surly expression and let the jubilation take over him. He hugged his friend who was sitting at his left, the lady in front of him, the girl at his right who seemed to be his girlfriend, he raised his hand to wave a distant group as if he wanted to say: “we overcame the gale,” and he embraced a distant trio that was launching their beer. There’s no doubt, he is the second happiest man in the stadium. The first is Joshua, the Champion.

As fans we want to have the privilege of being in the arena, talking to the protagonist and having a seat inside the press room. That is, passing from being amateurs to analysts, at least in theory. However, our greatest desire can also be our worst punishment. We are like a child who found out that Santa Claus or the tooth Fairy does not exist. Then that magical enclosure becomes our office, so we enjoy “certain privileges,” but we lose the greatest of them: “the innocence.” See our heroes to be crowned, fight with them from the stands, shout, applaud, cry, desire the victory, suffer the defeat and enjoy the victory. Without knowing, our innocence, which is sometimes located in chair 236 row 29, which is almost stuck to the wall, is the greatest privilege of all. For that reason, that robust man wearing a white shirt stopped frowning and became an orchestra conductor to lead his musicians: The 90 thousand people who attended the Wembley gave their loudest applause to the Heavy Weight King, the Gladiator who holds the Black-Gold belt of the World Boxing Association and, maybe unknowingly, enjoyed the greatest privilege of all: surrender to the boxing passion with no restrictions.

The WBA will make history in Saudi Arabia 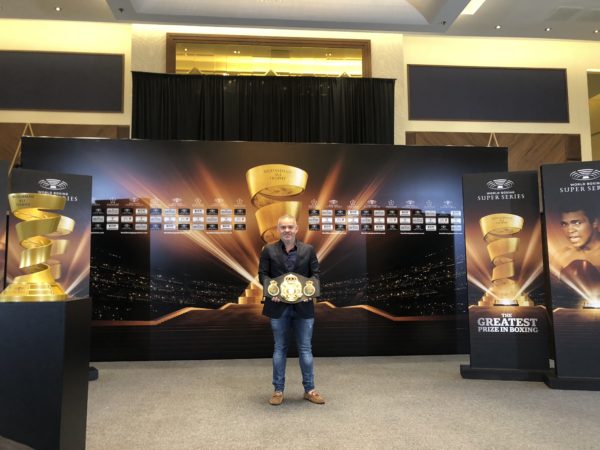