She possesses a strong fierceness of a fighter in her every move in the ring. Every injury from the past she knew how to turn it into a memory to become stronger and stronger during every challenge she has chosen to face in her personal and sporting life. At the 02 Arena in London, Claressa “T-REX”, or “GWOAT”, Shields not only wants to defend her belts and add another one, but she wants to make it clear to the world why she defines herself as the best woman of all time.

The press conference brought them face to face again as they did five weeks ago when their clash was postponed due to the passing of Queen Elizabeth II on September 8. Claressa Shields had repeatedly said that Savannah Marshall’s triumph over her in May 2012 was just a matter of luck, but that she will not have it again. Shields reaffirmed her words by showing tremendous self-confidence.

“I think when you work hard and put in extra work with more time and you know you’ve done your homework and you’re very prepared, that’s what builds confidence. People show up with false confidence and just focus on just selling the fight, but I know what I’m capable of and I know what I’m going to do on Saturday,” were the determined fights from the Flint, Michigan boxer.

Bo, Claressa’s father, came into her life when she was only 9 years old. He had been in jail since his daughter was two years old. When he returned she had already developed an early maturity due to the burden of a mother trapped by alcohol and abuse from the partner of a mother who couldn’t past her addiction at the time. Bo, had been an underground boxer and took it upon himself to regale Claressa with his passion by telling her stories. The little girl met Laila Ali and began to dream of being as big or bigger than her. And although they refused to teach her boxing, at the beginning, because she was a woman, at the age of 11 she managed to start her life among bags and ropes. Thus, she began to break all records. With a furious look and an open heart. She never stopped her march.

She became the first boxer to win two Olympic gold medals for the United States. She won local tournaments, Junior Olympics, World, Pan American. She fought a total of 65 fights as an amateur, only one of which took away her undefeated record and put, just for an instant, in jeopardy her chance to travel to the London 2012 Olympic Games. That was Shields’ first Olympic date and then came Rio 2016 with another historic podium finish for her.

In November 2016 Shields made her professional debut against Franchon Crews Dezurn whom she defeated in 4 rounds unanimously and whom she had also beaten on the road as an amateur. By March of the next year she was already in contention for her first belt: she defeated Szilvia Szabados by technical knockout in the 4th round and was crowned 160 lbs. champion by the North American Boxing Federation. In the same year, 2017, she jumped to the super middleweight category and conquered the IBF and WBC belts after defeating the fighter from Germany Nikki Adler by quick definition in the fifth round of the fight.

Arrived in 2018 he returned to 160 and defeated in 10 rounds Hanna Gabriels to take the World Boxing Association and IBF belts. A few months later she added the WBC against Hannah Rankin. By 2019, having defeated Christina Hammer and conquered the WBO and The Ring; she was already undisputed middleweight champion.

In 2020 she changes divisions again and wins new super welterweight belts. In March 2021 she defeated Marie Eve Dicaire unanimously for the judges and became also undisputed champion of that division (reason why the WBO belt was vacant and Marshall took it). Claressa Shields was included in the 2022 Guinness World Records for being the female boxer to be enshrined in three different weight classes with only 11 submissions.

“12-0 as a pro and you haven’t learned how to finish anyone,” Marshall hurled at Shields in one of the explosive exchanges of words at the press conference. Shields belittled the 10 knockouts that the “Silent Assassin” scored, in her also 12 professional appearances, telling her that they were only against opponents who had more fights lost than won, while she faced more experienced opponents with better numbers.

The word fights have already come to an end. Finally, Claressa Shields will have a chance to avenge that setback Savanna Marshall handed her ten years ago. Finally, both will show the world why they are among the elite of women’s boxing in the world.

Haney vs Kambosos and Shields vs Marshall for undisputed titles 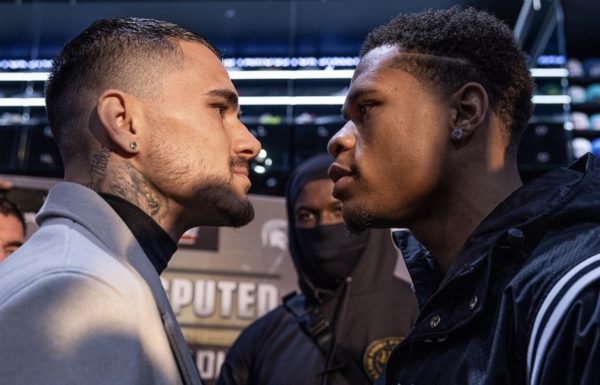