The bout takes place this Saturday, June 29th, at the Dunkin Donuts Center in Providence, Rhode Island, and will be broadcast live on DAZN. The bout will be Yafai’s fifth defense of the WBA world title that he won back in December of 2016 vs Luis Concepcion at the Manchester Arena.

“Thanks to everyone who made this possible. I had a great training camp, I am going to put my life on the line for this fight,” said the world champion Yafai at the final press conference to the crowd expecting a great fight in the small state of Rhode Island.

“He has never boxed anyone as quick, powerful and talented as me,” Yafai continued, “He is in for a rude awakening on Saturday night.”

Yafai is coming into the fight having last defended his title against Israel Gonzalez, where he won a unanimous decision but some fans and media thought the fight was far more closely contested.

As for the number one challenger Norbelto Jimenez; on paper to some fans and media he may look like just another opponent but he is far from that as it is important to note that he has not lost a bout in over eight years, while he has slowly but steadily rose in the rankings fight by fight.

“This is a long overdue title shot for me,” said the challenger, “I am coming for the title on Saturday night. I owe the Dominican Republic a title, I am not going to be robbed this time like I was in my last title shot. I am going to make this one count.”

The “robbery” that he is referring to was his fight to a draw with then WBA World Super Flyweight Champion Kohei Kono in December of 2014 that took place in Japan.

Jimenez started his professional career 2-8-1 in his first 11 bouts, but has since went 27-0-3 in his last 30 professional fights, keeping an undefeated streak over that eight year time span and having won the WBA Fedelatin and Fedecentro regional titles. 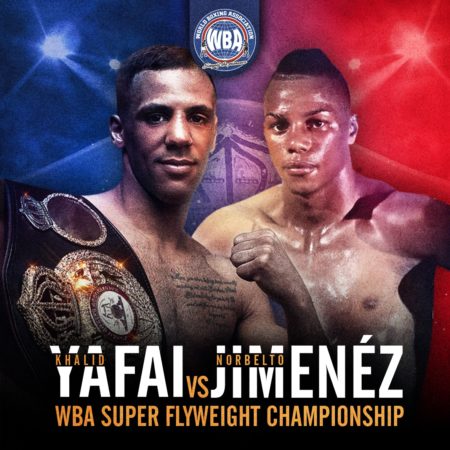