The World Boxing Association (WBA), committed to the world title reduction plan, denied the special permission requested by the team of the super welterweight champion, Cuban Yordenis Ugas to make a unification fight.

The world title reduction plan is currently a priority for the WBA and all the decisions taken are to achieve this goal. This was announced last August 25 after a negative media campaign on multiple titles.

In the 147 lbs. category, it was decided last September 15 by a resolution, that there would be a Box-Off between Jamal James vs Radzhab Butaev and Yordenis Ugas vs Eimantas Stanionis, whose winners of both fights would fight later so that in there would be only one champion in the division.

On September 16, TGB Promotions, on behalf of  Ugas, submitted the request for a special permit for a unification fight against the WBC and IBF champion, the American Errol Spence, with February 22, 2022 as the date.

In this regard, the Championships Committee sent notice of Ugas request to the team of Stanionis, the mandatory challenger. They were against the request and their comments were sent to Ugas. The opposition of the Stanionis team was supported by the previous resolution that ordered the Box Off. Even so, the WBA organized a hearing with both parties on October 18 so they could present their arguments, the zoom meeting was recorded for any legal purposes.

The decision taken by the WBA is based on its own rules, which fighters and their teams are obliged to know, especially in this kind of cases. Right now the priority is to have only one world champion to “Help improve the image of boxing through appreciation, enjoyment and positive public perception of the quality and integrity of boxing”, as reflected in article 2.01 of section C of its by-laws.

Box Offs can be called by the chairman of the WBA Championships Committee and must be complied with under the parameters explained in the rules. Rule C.33 states that if a boxer refuses to participate in a mandatory defense, elimination bout or Box Off, his title may become vacant or be demoted or removed from the ratings.

Another important rule is C.47, which states that “The Committee and the President, in their sole discretion, shall consider the best interests of boxing, the purposes and policies of the Association, and other factors that may be relevant, and shall use their best efforts to balance the competing interests. The WBA is not obligated to grant a Special Permit application.”

The rejection of the permit was made after an extensive study of the current boxing situation, the plan to reduce world championships and, of course, the arguments of the parties involved. The rejection is specifically due to the special circumstances of the present time and the search for a solution to the multiple titles.

It is well known in the boxing world how attractive and important unification bouts are but the policy of having only one champion per division is the priority. Granting special permission to Ugas would go against that goal.

As of the publication of the resolution this October 19, the teams of Ugas and Stanionis will have 30 days to negotiate the bout. If no agreement is reached within that time, either party may request an Purse Bid.

Soto-Lopez in a battle of youth vs. experience for Fedecentro belt 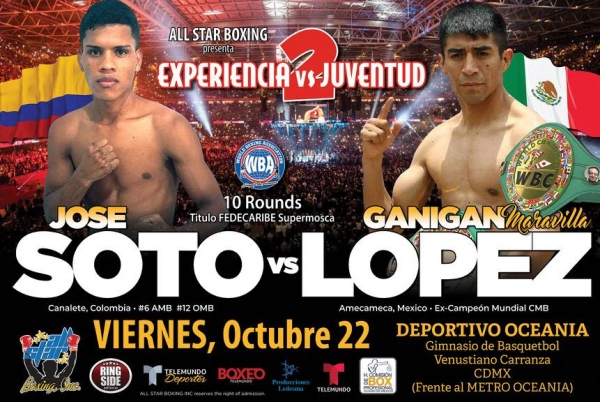