This Friday morning, an important meeting was held between delegates, members of the World Boxing Association (WBA), at the conference room of “The One” Hotel, in the City of Astana, Kazakhstan.

This board meeting of the WBA delegation, which had the participation of several leading regents of this governing body of boxing, was chaired at the main table by Venezuelan Carlos Chávez, who is the legislative director of the WBA and Canadian-Argentine George Martinez, who is the chairman of the WBA world championships committee and its continental director.

Also present were Bulgarian Mariana Borissova, who is the coordinator of the continental title of the WBA and handles the European wing, Panamanian José Oliver Gómez, who serves as adviser to the presidency of the WBA, South Korean Won Kim, who is the executive secretary of WBA Asia and Danish Jesper Jensen, assistant director of the WBA. WBA officials, Italian Stefano Carozza and the Polish Leszek Jankowiak, also participated in the gathering.

The WBA delegates, who were invited by the Ministry of Culture and Sport of Kazakhstan and the Mayor’s Office of Astana, dealt with specific and internal issues of this international, non-profit, boxing body, as part of a festive Astana, capital of Kazakhstan, which celebrates 20 years of its foundation and the birthday of Kazakhstan President, Nursultan Nazarbayev.

At the end of the WBA delegates meeting, local and international press got the opportunity to take pictures and collect relevant information, in addition to conducting several interviews, with its main actors. 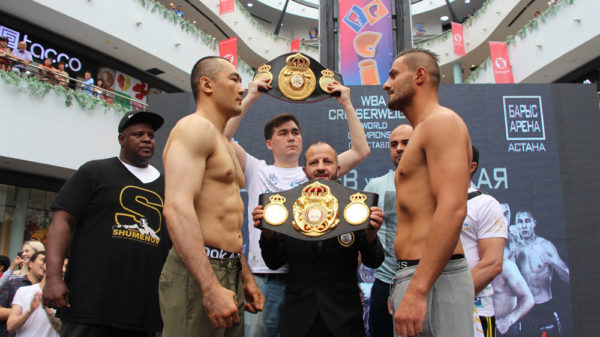