The first workday of the 92nd Annual Convention of the World Boxing Association was completed with the Directorate Meeting on Monday in Lima, Peru.

Executive Vice President, Gilberto Jesus Mendoza, read the WBA Creed and the statutes, in addition to complying with the requested quorum to open the working session.

Mendoza made a brief review of the Minutes of previous Convention of Jakarta 2012, as well as Playa Bonita directory held in Panama in August this year.

Then came the reports presentation, beginning with the scoring system and new website details. The review of productions made by the audiovisual Department of the WBA, together with the summary of the live broadcasts made on the WBA website.

In the second working session the directors made work groups to discuss five championship scenarios to apply the new and the old rules, or in some cases both, regulations to decide the best solution of the problems, as well as suggestions to them.

The cases were on doping, Championship fights, anti-doping test and Championships unification. All teams, formed by the different directors of the WBA, had to make presentations of their cases. To do that they had sheets of paper, markers, crayons and watercolors.

In addition, they were evaluated by teamwork, oral presentation, and the correct application of regulations with a jury of the wives present, presided by Elena Mendoza. 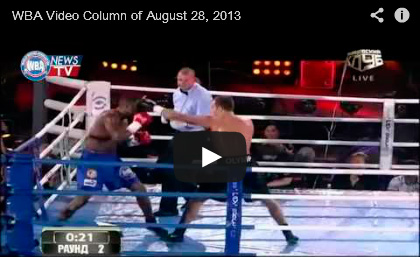