Gilberto Jesus Mendoza, president of the World Boxing Association, once again highlighted the word “union” as the only way to develop professional boxing. He commented this Wednesday during the XXIV Congress of the International Association of Sports Journalists of America, AIPS-America held in Cali, Colombia from July 11 to 15.

Mendoza lectured about boxing before an important group of journalists. The WBA leader analyzed different aspects such as personal interests, and many others, often unrelated to the sport, and their influence on the athletes’ career. Additionally, he talked about the regional bodies that leave aside the world organizations when making decisions. An example of this are the United States boxing commissions that have their own rules and only accept “suggestions” from the global entities.

“This makes boxing difficult for the public and the journalist. First we are four bodies that govern this sport (WBA, WBC, IBF and WBO) and now we have to add a new player: AIBA that has professional and semi-professional tournaments. Then we must take into account national regulations, as in the US that prevent us to appoint neutral officials to a fight in Las Vegas, for example, violating the impartiality principle of, because when a foreign boxer fights an American in the US the judges are all local judges, said Mendoza. He also referred to the Boxing Safety ACT laws of 1999 and the 2001 Muhammad Ali that regulate the actions of boxing organizations in that country.

Among the actors affecting boxing he mentioned promoters, managers and lawyers. Many times they avoid very attractive fights to protect their own interests or seek less suitable opponents to make more money. Undoubtedly this problem affects, because the delay big fights, or we find undefeated boxers who lose in their first strong fight. That the reason why we are changing in the WBA, because we have been part of those drawbacks and we believe it is time to do our best for our beloved sport, said the WBA boss.

Then presented the “unity” as the ideal proffesional boxing scenario. “We must all unite, set aside our differences. I have said this repeatedly and I will never get tired of saying it. We have to work hand in hand with the boxer and make boxing organizations direct and really regulate boxing, said Mendoza.

At the end of his presentation he answered all the questions made by the AIPS America delegates country attending the congress, who also expressed their satisfaction with the honesty of the President of the WBA and his receptivity to answer all the questions. 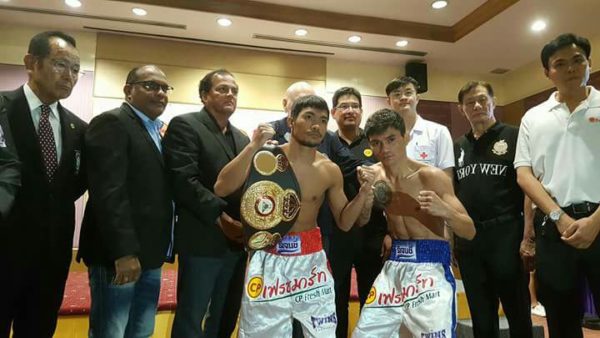