In anticipation of Saturday’s fight at New York’s Madison Square Garden Theater between WBA Super World featherweight champion, Nicholas “Axe Man” Walters (25-0, 21 KOs), from Montego Bay, Jamaica, and Miguel “The Scorpion” Marriaga (20-0, 18 KOs), from Cartagena, Colombia, I’ve been trying to get a hold of the champ.

It wasn’t easy. In fact, it wasn’t successful.

But as luck would have it, I came across two interviews—the first from The Gleaner, the second from UnitedReggae.com—that proved useful.

The Axe Man’s father, Job Walters, was a fighter himself. He fought as a featherweight from 1986 to 1991 and went 12-7 before retiring.

“Growing up in those days and living in a home,” Job told The Gleaner, “there were really only two options for you if you didn’t have an education—music and sports. I used to dabble in cricket and when I left the home at 16, one day I went to a cricket match with my father and saw a man challenging anyone to box him. I decided to give it a try and the people were cheering for me because the guy couldn’t hit me.

“I found my purpose in boxing. It was a vehicle for me to travel the world and give me a better life. Traveling to compete in matches opened my eyes to be grateful for what I have because some people live worse lives, but still are humble and grateful.”

That humility and gratitude is something Job passed on to his son.

“My father was a pro fighter and I loved to watch him train,” Walters said. “That’s how I first got interested in boxing. He noticed my interest and personally kicked off my career when I was just a boy. Everything I am today is because of him. Every success is due to him. Not only was he my father, but he was my first coach and he believed in me every step of the way, even when I doubted myself.

“My first win at age 22 against Panamanian Esteban Ramos helped to boost my confidence and showed me that based on my father’s teachings and my own hard work I had what it took to make a career of boxing. Because of my dad, boxing changed my life and is now a big part of it.”

Job added, “To see my boy fight is good for me. I love going with him to his matches not just because he’s a good boxer and I am confident he will do well, but because he’s giving something back to the world—enjoyment, entertainment and mostly to the Jamaican public, honor and pride.

“Everybody needs a purpose in life and I am happy that Nicholas has found his. Win, lose or draw, he’s making the world a better place through his boxing. I couldn’t be happier.”

Jamaica is the Axe Man’s home, but he currently lives and trains in Panama.

“Jamaicans and Jamaica have a strong boxing background,” Walters said. “The Jamaican people—they love boxing. It went down for a few years but it’s coming up now, it’s coming back and we’re catching up. In Panama there is definitely more competition, more events, more fight cards, and boxers can be more active in Panama. So my manager, Mr. Jaques Deschamps, decided to have me move over there to do some work. We went over there and we liked the environment and the atmosphere and we just stuck over there.”

There are worse things than being stuck in Panama.

“In Panama I got to meet quite a few of the past world champions and they are good friends of mine. Roberto Duran is a good friend of mine personally and we have been invited to the same events so we hook up, we talk and sit down together. Not only do I get the chance to meet some of the superstars in boxing from Panama but I also get points and instructions from them for my young career, so I’m very blessed.” 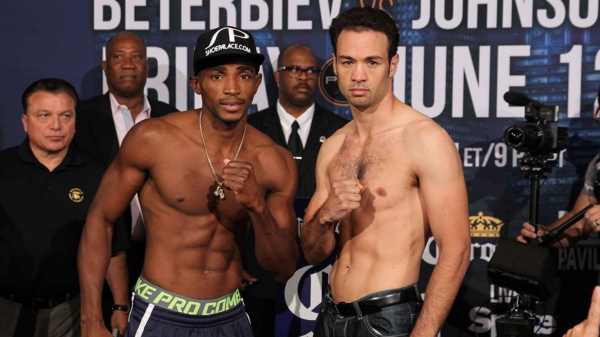