Also, WBA light minimumweight ruler Mari Ando (9-3, 4 KOs), 101.5, Japan, retained her title as she showed her technical improvement and earned a nearly lopsided verdict (100-90, 99-91 and 98-92) over ten busy-punching sessions.  The scoresheets read: Prayadsab 99-91, Asao 100-90 and Caiz 98-92, all for the defending champ.  Romina Arroyo, an Argentine female referee, remarkably handled both bouts to win the crowd’s admiration.

In an encounter of southpaws, Tada utilized her superior speed on hand and foot to handle the hard-hitting Mexican throughout the contest.  The shorter lefty Salinas, eight years her junior at 22, had the upper hand with a two-fisted attack in the fifth, but the champ made good use of footwork to avert the challenger’s retaliation.  In the second half Salinas occasionally threw heavier shots to the elusive champ, who busily jabbed and countered the willing mixer to steadily pile up points.  Tada said, “Salinas was the strongest among seven challengers, but I coped with my speed and skills.”

The 24-year-old Ando, who became the first WBA 102-pound champ last year, took the leadoff with her opening attack to the still nervous Mexican.  Jimenez, 26, sometimes threw good left-right combinations, but Ando accelerated her attack with a flurry of punches to control the hot but one-sided affair.  The third woman Arroyo did a good job in handling the busy-punching fight.  The jubilant victor Ando said, “I’m happy to make the first defense by showing what I’ve been training.  I’ll improve more.”

In an eliminator to decide the next challenger to the WBA titlist Ando, Ayaka Miyao (8-1, 1 KO), 101, came off the canvas in the second, fought back hard and earned an important victory by a hard-fought decision (8-3-1, 3 KOs), 102, over eight.  The energetic Miyao will have a shot in Ando’s next defense this summer.

The OPBF female flyweight champ Go Shindo (10-1, 8 KOs), 112.5, exploded solid one-two combinations, dropped Thailander Nongtak Au Kunjahuaykwang-Gym (9-9, 1 KO), 109.5, with a sharp right and halted her at 1:55 of the second round in a scheduled eight.  It was a tune-up go for Shindo to have a shot at the WBC 112-pound belt against Mariana Juarez either in Mexico or in Japan.

All seven were female fights that fully entertained the spectators at Yomiuri Cultural Hall. 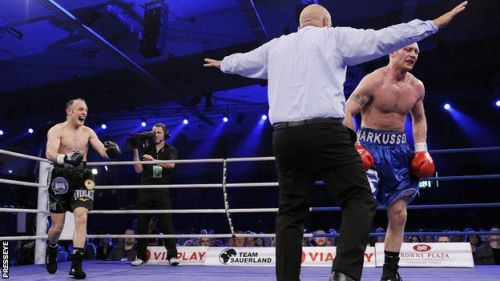