To add insult to injury, Fury sang an old Aerosmith song in the ring while Klitschko and his team were forced to look on.

From the beginning, Fury was the busier and sharper fighter, but there weren’t a ton of punches being thrown by either man. Fury’s head movement, feints and 85” reach seemed to completely stymie Klitschko’s offense. The long-time king of the heavyweight division simply could not get off.

Sensing his charge was in danger, trainer Johnathan Banks urged Klitschko to pick up the pace just before the fifth round, but the Ukrainian continued to have difficulty letting his hands go. In the fifth round, matters got even worse for Klitschko. A clash of heads opened a cut under his left eye.

Klitschko’s body language looked to suffer after that, and his arms grew even heavier from that point on.

With his confidence growing by the second, Fury switched between southpaw and orthodox to further confuse Klitschko, and it worked like a charm. He continued to widen what proved to be an insurmountable lead on all three judges’ scorecards.

There was some drama. Decisions in Germany can often be unpredictable, so when Fury had a point deducted for repeated rabbit punching in the 11th round, it seemed like he had put himself in position to be robbed.

As the scorecards were read and Fury was declared winner and new lineal heavyweight champion of the world, he and his team erupted in celebration. Widely known as an over-the-top character, Fury was much more conventional during his post-fight interview.

He apologized to Lennox Lewis, who conducted a portion of the interview, for some past disparaging comments, and even attempted to make amends with Klitschko for similar remarks.

However, the normalcy left when Fury grabbed the microphone from Lewis and serenaded his wife with a rendition of “I Don’t Wanna Miss a Thing.”

A new day has dawned in the heavyweight division. 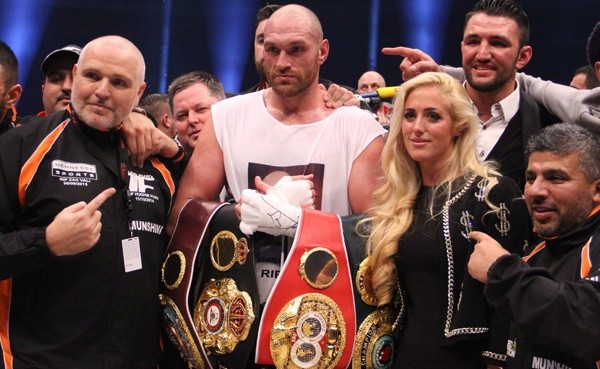