From the StubHub Center in Carson, California, WBA super champion Leo Santa Cruz and WBA world champion Abner Mares both retained their titles to force the eventual collision between the two featherweights in a highly anticipated rematch that many fans have been clamoring for.

Leo Santa Cruz improved to 34-1-1 with 19KO’s and retained his WBA super champion status at featherweight as he stopped Chris Avalos in the eighth round.

Leo Santa Cruz lived up to his nickname of “El Terremoto” as he laid an avalanche of gloves on the veteran Avalos while showing why he is tops in the division and a top pound for pound fighter in the world with a nearly flawless performance.

Avalos showed great heart and durability as he weathered the storm for eight rounds while still trying to change the course of the fight with his own power punches.

Santa Cruz was never in trouble in the fight and really put on a masterclass that culminated with referee Thomas Taylor stopping the fight in the eighth round when Santa Cruz was really laying the leather on his opponent.

In the co-main event Abner Mares put on a masterclass performance of his own over ten rounds to hand Andres Gutierrez only his second loss in 38 professional fights.

Gutierrez showed amazing stamina and heart as he continued coming forward through constant barrages and a cut above his left eye that got worse and worse as the rounds went on.

Mares was hitting Gutierrez at an amazing 50%+ rate with his power shots that he seemingly couldn’t miss.  He was sharp, accurate, and had good snap on his punches despite being out of the ring for ten months.

The end of the fight came in the tenth round when referee Jack Reiss stopped the action to have the doctor take a look at Gutierrez’s eye, which was now flowing blood very bad.  The fight was stopped but it was surprisingly not a TKO victory as the final ruling went to a technical decision due to “accidental fouls that caused Andres Gutierrez to be unable to continue” with Mares winning the decision.

The fans will be eagerly anticipating the rematch between these two champions, with both mentioning that they want the fight it in their post fight interviews.  Super champion Leo Santa Cruz put it simple but succinct: “Lets get it on.” 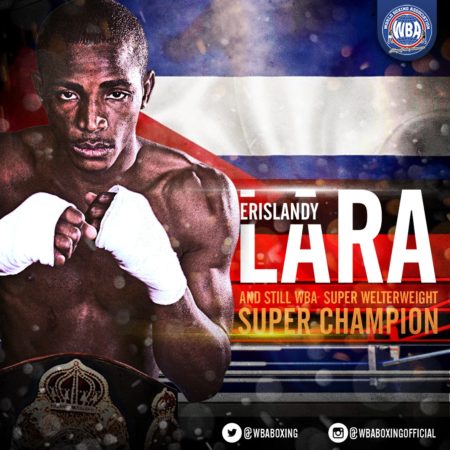