Leo Santa Cruz talked about how close the first fight was and how Robert Garcia in Mares’ corner for this rematch could play a role.

“It was a really close fight the first time. Before the fight, I told him I would give him the rematch, just like I would have wanted if I lost. Now is the time and I think this fight is going to be even better than the first fight. Mares will be better with Robert Garcia. He has many champions and I’ve seen the improvement. That’s great motivation for me.

“I think that Abner is going to be a little smarter than the first fight. He said in the first fight he didn’t train for the right fight. I know Robert Garcia will have him bring a smarter fight. We’ll be able to adjust and do what we have to do to win this one.”

Santa Cruz went on to say that his father is going to have an excellent game plan for him and he expects fireworks.

“I know he’s going to seek revenge, but I’m not going to let that happen. My dad is a smart man too and he always knows how to send me to the ring with the right style. When two Mexicans get in there, you know it’s going to be a war. I hope everyone comes out June 9 because it’s going to be a fight to remember.

“I have to make some little changes. There will be adjustments. We have to be prepared to box. I’ll listen to what my dad tells me to do. We’ll know early and take it from there. I know how to fight different styles, but brawling is what the fans love. I’m going to do that while still being smart in the ring.”

Santa Cruz is dedicating this fight to his father, who is still battling cancer, as he said “The only way I can pay him back or try to lift his spirits is to train hard in the gym and give him this win. If he sees me not giving up, I think it will give him the courage to keep fighting his battle.”

Santa Cruz, as always, thanked the fans for coming out and mentioned that the fans are a inspiration and motivation for him alongside his father, “Every time I step into the ring, I do it for the fans. If it weren’t for them, I wouldn’t be here. I always want the fans to go home happy. I want to give the fans a great show on June 9 just like in the first fight.”

El Terremoto had a hard time after his first and only loss of his career to Carl Frampton in July of 2016 but it is the fans that he still wants to please every time he steps into the ring.

“It was hard after the loss to Carl Frampton. I got a lot of fan support that inspired me to get back to training and win my title in the rematch. My plan was to retire undefeated, but at the end of the day, the loss means nothing. As long as I give the fans great fights, that’s all that matters.”

Abner Mares talked about how he has great respect for Santa Cruz, as the two fighters are known for getting along great as friends outside the ring.

“This is going to be another great one. Leo Santa Cruz is a great person and a humble guy. You have to be the bad guy against Leo. I could talk about what I’m going to do in the ring, but my fists and my brain will do the work for me.

“Once we get in the ring, you already know what it’s going to be. It was war from the first bell last time. Nothing could stop either of us. We pleased the fans and gave them a great night. This is going to be the same thing. We’re two young fighters, fighting for pride.”

Mares talked about sticking to a game plan in particular, which is likely going to be the big role that his trainer Robert Garcia takes on and hammers home in training camp.  Mares is known for getting into wars for fights and he is very aware of that.

“The fight is here now and it’s official. I’m eager to get this win and get redemption,” said Mares, “There were things I could have done that would have made the fight easier for myself. Once you get in there, I know we all have a plan, but once you hear the crowd, it can go out the window. I’m a warrior and that type of fighter who’s looking to get the win no matter what.

“I’m not worried about the decision in the first fight. I think he landed the clearer punches but it was definitely a close fight. I was happy with my performance as far as pleasing the crowd. I’ve moved on to the rematch. I’m going to make adjustments and get the win.”

Mares sounded extremely confident as he pointed to his last two bouts against Andres Gutierrez and Jesus Cuellar as proof that he is still improving now that he has the right team around him.

“I can talk about how I’ve changed, but you just need to look at my last two performances. People thought Jesus Cuellar was going to knock me out, but I was the one who dropped him That lets you know what type of team I have and what kind of Abner Mares you will see on June 9.”

Mares is excited to be back at the Staples Center in particular, which he has fought at four other times in his career, saying, “It feels good to be back fighting Leo for the second time at Staples Center. Every time I fight here in Los Angeles the people show me love. This is my hometown and Staples Center is my house.”

In closing Mares talked about securing the win against Santa Cruz and how Leo is the type of fighter that has holes in his game but he is so experienced that it is difficult to take advantage of them unless you execute a very good game plan.

“I’ve always seen holes in Leo’s game that I can take advantage of. It’s a matter of going in there with the perfect game plan. I feel like there’s no way I can lose this fight. That makes it a more exciting fight. If he wants to box, I’m more natural than him doing that. We’ll see who’s done their homework and who can translate it to the ring.”

Torres and Plata Weigh In 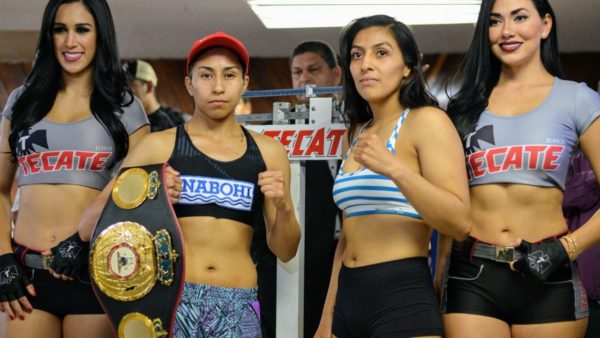