Holyfield won the rematch in 1993, held in a parking lot at Caesars Palace. But the highlight of the evening was the appearance of “Fan Man,” an adventurer named James Miller who parachuted into the ringside seats in the seventh round.

Mayhem ensued. The fight was stopped. “Fan Man” got beaten up.

“It was a heavyweight fight,” Miller said, “and I was the only guy who got knocked out.”

“I was bewildered that he would come into the ring,” said Bowe about the incident. “I believe that he really cost me the fight because it took me so much longer to warm up because it was cold that night.

“It really gave Holyfield an advantage. I think it was a set-up. They set me up.”

Bowe was inducted into the International Boxing Hall of Fame in Canastota last summer, but to be honored in Las Vegas is something special.

“It means a lot to me,” Bowe said Friday at Caesars. “I started my career in Reno, Nevada, and just have so many wonderful memories of Las Vegas. I just beat so many guys here that people didn’t think I could beat.”

Bowe isn’t the first man to fall in love with Las Vegas, nor will he be the last.

“I think the difference is for whatever reason I felt like I was a favorite here,” Bowe said, “because everybody in this town always showed me love that made a big difference.

“I’ve been retired for 15 years and for people to still show me so much love, it’s off the chain. It’s overwhelming sometimes and even makes you want to cry.”

Riddick Bowe was in good company for the ceremony. Other inductees into the 2016 Hall of Fame class include former WBA World lightweight champion Ray “Boom Boom” Mancini; Ricardo “Finito” Lopez, who retired with a 51-0-1 (38 KOs) record; Pernell “Sweet Pea” Whitaker, Willie Pep reborn as a southpaw to fight out of Norfolk, Virginia; Freddie Little, Nevada’s first world champion, who is 80 years young and joked about making a comeback; and Christy Martin, the “Coalminer’s Daughter,” who fought her way out of West Virginia to put women’s boxing on the map.

Congratulations to all the inductees… and a tip o’ the hat to “Big Daddy.” 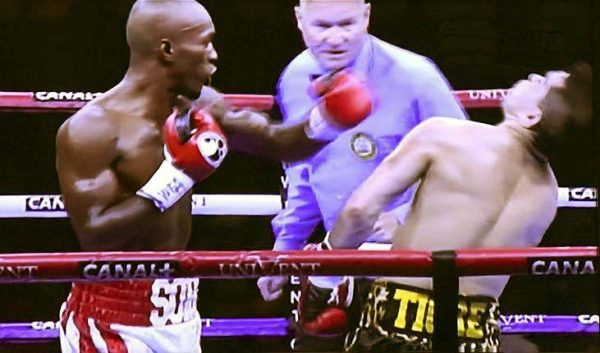