The fighter who calls himself ‘The Alien’ is human after all.

Two months shy of his 50th birthday, Bernard Hopkins was well beaten by Sergey Kovalev who later advised the ring legend to call a halt to his illustrious 26-year career.

Hopkins was knocked down in the first round and lost every subsequent session of this light-heavyweight unification clash.

‘He had a good game plan, he was nice and rangy,’ said Hopkins. ‘He fought a great technical fight. He has patience and every time he got hit he did the right thing and stepped back.

‘He’s going to be around a long time and I’ve got respect for someone who wants to fight the best.

‘I really don’t want to say anything [about his future]. It’s been 50-50 for the last nine years.’
Hopkins, 18 years his opponent’s senior, won his first world title when Kovalev was just 12.

By the time the Russian turned professional 14 years later, Hopkins had already ruled the middleweight division for a decade.

Prior to Saturday night, Hopkins had boxed 494 rounds, more than five times as many as Kovalev.

And Father Time finally caught up with the Philadelphia native who clung on during a torrid final round to avoid the first stoppage defeat of his career.

‘He was a really tough opponent,’ said Kovalev. He is very good at keeping the distance. I have a lot of respect for him but he needs to stop his career.

‘He needs to give opportunities to younger guys to be champions.

‘I wanted to show my fans that I can box; I tried to knock him out but he has great defence.’ 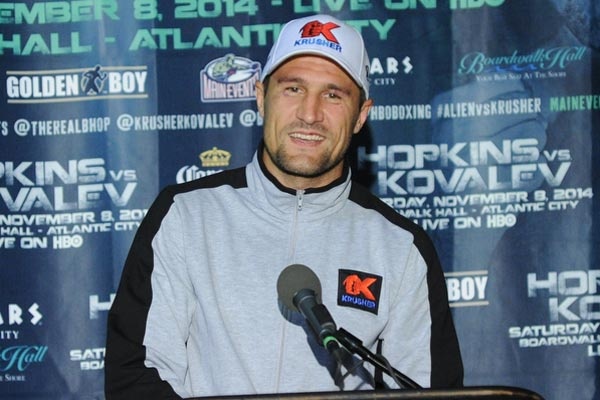