Terry O’Connor of the UK will ref, while Howard Foster, also of the UK, Jesus Morata of Spain, and Jose Roberto Torres of Puerto Rico have been named judges. The WBA’s representative will be appointed by Renzo Bagnariol of Nicaragua.

Twenty-six-year-old Quigg is an eight-year pro who fights out of Bury, Lancashire, UK. He won the title in November 2013 by stopping Diego Oscar Silva via second-round TKO. He most recently fought in November 2014, successfully defending his title against Hidenori Otake, winning by unanimous decision.

A resident of Alicante, Comunidad Valenciana, Spain, 29-year-old Martinez is an 11-year veteran who last fought in December 2014, stopping George Gachechiladze by second-round TKO. The Spaniard, 11th-ranked by the WBA, has lost only one of his last six, losing his IBF World super bantamweight title to Carl Frampton by unanimous decision in September 2014. He’s been stopped only once, by Frampton via ninth-round TKO in February 2013.

Foster will serve as referee, with O’Connor joining Morata and Torres at the judging table.

Eleventh-ranked by the WBA, Crolla is a nine-year pro who last fought in November 2014, outpointing Gyorgy Mizsei Jr. Apparently fully recovered from a brutal attack at the hands of burglars last December, Crolla now has his first crack at a world title. He’d been scheduled to face Richar Abril (now Champion in Recess) for the title in January, but that opportunity was put paid by the injuries sustained in the attack.

The referee for the fight is Giuseppe Quartarone of Italy. The judges are Lynn Carter of the US, Jean Toupin of France, and Kardini Pawel of Poland. The fight will be supervised by Jesper Jensen of Denmark.

Seventh-ranked by the WBA, 19-year-old Feigenbutz is a four-year pro who fights out of Karlsruhe, Baden-Württemberg, Germany. He most recently fought in March, stopping Balazs Kelemen by ninth-round TKO. His sole loss came by way of Roman Alesin, who won by third-round TKO in March 2012. Only Tiran Mkrtschjan has gone the distance with the German, losing by majority decision in July 2013. 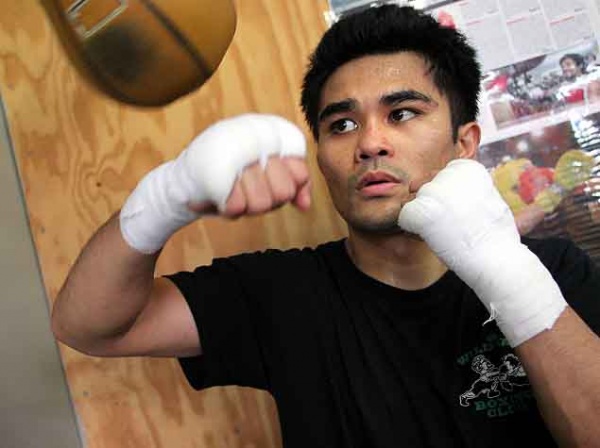