Twin brothers Jason (16-0, 13KO’s) and Andrew Moloney (16-0, 10KO’s) made weight in their respective divisions in lieu of their bouts this Saturday, May 19th, at the Town Hall in Malvern, Australia.

Jason weighed in at 117.7lbs while his challenger, Kohei Kono (33-11-1, 14KO’s), came in at 117.9lbs.  Jason will be defending his World Boxing Association (WBA) Oceania Bantamweight Title – the same title that his brother Andrew used to hold, as both brothers have dropped down a weight class in the last year.  This will be the second defense defense of his Bantamweight Title after previously held the Super Bantamweight WBA Oceania Title.

This will be Jasons stiffest test to date, as Kono is a two time ex WBA Super Flyweight champion and a very experienced veteran of 45 fights, having only been stopped inside the distance one time by Naoya Inoue.

Andrew weighed in at 114.6lbs while his challenger Richard Claveras (18-3-2, 15KO’s) weighed in at 113.3lbs.  Andrew will be defending his World Boxing Association (WBA) Oceania Super Flyweight Title for the third time after previously holding the WBA Oceania Bantamweight Title before dropping down a weight class.

Just like his brother, Andrew also has a good test in front of him as Claveras brings good knockout power in both of his fists.  Andrew plans to box smart to stay away from that power, having sparred with large, heavy handed fighters to prepare himself for the challenge.

This will be the 15th time the brothers have been featured on the same professional card together.  The twins are advancing rapidly up the rankings as they both hold WBA Oceania titles and have their goal set in mind of challenging for World Titles in the near future. 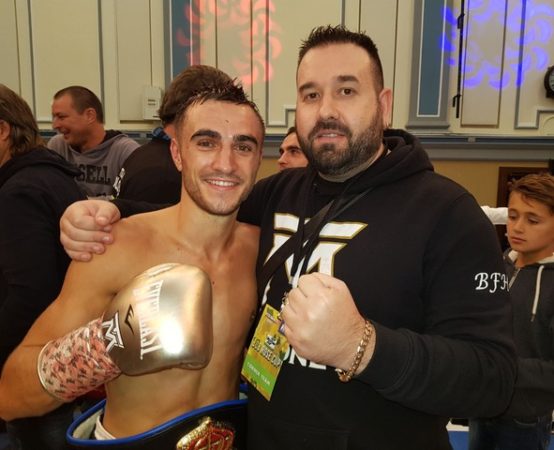