The Puerto Rican knockout artist Alberto ‘Explosivo’ Machado will make the second defense of his Super Featherweight Championship of the World Boxing Association this Saturday at the Theater of Madison Square Garden in New York, against the American Yuandale ‘Money Shot’ Evans.

The billboard, mounted by Matchroom Boxing and DiBella Entertainment, will be one of the last that HBO broadcasts and a spectacular outcome is expected due to the power of both the champion Machado (20-0, 16 knockouts) and challenger Evans (20-1, 14 knockouts) in the co-main event, as the star will be the former WBA Middleweight Champion, Daniel Jacobs fighting against Sergiy Derevyanchenko.

Machado, who won the title last year with a knockout over Jezreel Corrales, has just emerged as champion last July in Las Vegas, taking a wide points victory against Ghanaian Rafael Mensah in a mandatory fight. Should he win against Evans then it is expected that there could be a possible battle against the ex-world champion Francisco ‘Bandido’ Vargas.

Evans, who took a break of more than two years after losing the undefeated world champion Javier ‘Abejón’ Fortuna, resumed his career in 2015 with good results, as he achieved a pair of wins by knockout, and then in 2017 he returned to the ring with two more victories against rivals of good record. He hopes to continue now in a WBA world title fight against the Puerto Rican.

This week, the women’s title fight will also take place between the Japanese native Akiya Seki and the Mexican native Maribel Ramirez in Switzerland. 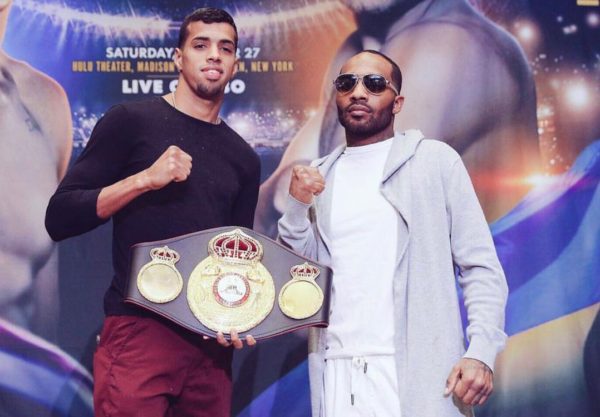