WBA/WBO/IBF heavyweight champion Wladimir Klitschko (64-3, 54 KOs) scored a twelve round unanimous decision over previously unbeaten challenger Bryant Jennings (19-1, 10 KOs) tonight at “The World’s Most Famous Arena”, Madison Square Garden. Klitschko got off to a good start, although Jennings had some moments. Jennings started to cause Klitschko more problems in the middle rounds with his movement and rushes. Klitschko was deducted a point for holding from referee Michael Griffin. Jennings took some big shots in round twelve. Scores were 116-111, 116-111, 118-109.

This was Wlad’s 18th consecutive heavyweight title defense, a mark is surpassed only by Louis (25) and Larry Holmes (20). Counting his first reign as WBO champion, this will be Wladimir’s 23rd title defense. It was also Wlad’s first fight in the U.S. since he faced Sultan Ibragimov in this same arena seven years ago.

Full Report: The Heavyweight Championship Belts returned to Madison Square Garden in New York, New York, with Wladimir Klitschko taking on undefeated Philly fighter Bryant Jennings, with the WBO, WBA, IBO and IBF belts on the line. Over 17,000 (17,056 to be precise) fans rocked the arena with Ukraine and Philadelphia fans proudly sporting their colors and affiliation while Deontay Wilder watched with keen observation at ringside.

Klitschko returned to America since his last fight here against Sultan Ibragimov and was keen to make this night much more memorable than the latter and did not disappoint.

After a cagey and cautious first round in which Klitschko reminded Jennings who the champion was, Klitschko began connecting his left jab with precision against the game but defensive Jennings. Jennings tried to use the smaller ring to his advantage, staying out of harm’s way and that devastating right hook of Klitschko and was able to connect with some well-timed body shots. Klitschko however, stuck to his tried and tested jab while limiting Jennings vision along the way.

The 4th round was by far and large Jennings’ best, combining his excellent footwork with well-timed overhand rights that caused Klitschko to think twice about coming in with his jab.

Round 6 brought out the chants of USA and Ukraine as both fighters began exchanging heavier punches, with Jennings growing in confidence thanks to some well-timed combinations. Klitschko responded with his right cross that got the crowd on their feet.

Round 7 and 8 swung the action in Jennings’ favor as he started to increase his activity and tried to impress the judges with his more aggressive approach while Klitschko kept it cool and composed in jabbing and waiting for the right chance to let some leather go.

As the later rounds went on, Klitschko was visibly slower and lacked the same output that he had earlier on in the fight and was docked a point for excessive holding by referee Michael Griffin in the 10th round.

Suddenly, a fight that was considered a walkover for Klitschko now became a fight in which he was on the verge of losing all the belts he had worked tirelessly to acquire. Jennings took Klitschko’s best shots and stayed upright and making it through to the 12 round.

Round 12 saw moments of the Wladimir of old, as he unloaded heavy combinations and reminded the world why he is called Dr. Steelhammer.

My unofficial scorecard had Klitschko by 116-111.

Jennings may feel hard done by as he had been the most ferocious opponent Klitschko has faced in some years but Klitschko knows how to win and used his experience to see himself through.

Next up for Klitschko, Tyson Fury, Deontay Wilder? One thing is for sure, Shannon Briggs wasn’t allowed in the arena and can’t ask for the fight this time around. 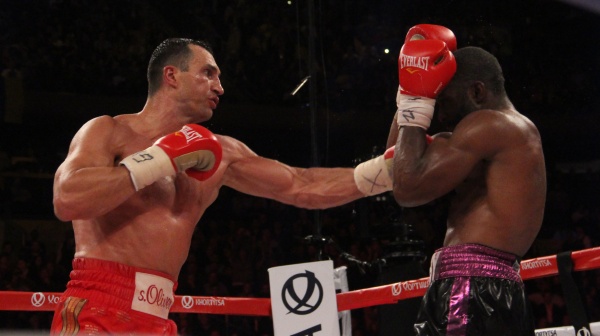