On October 28, 1972, Antonio Cervantes “Kid Pambelé” won the world champion title of the World Boxing Association (WBA), 45 years after he has arrived to Medellin City to be part of the 96th Convention of the pioneer organization within the boxing world.

pon his arrival at the Convention venue, Pambelé met with Gilberto Jesús Mendoza, President of the WBA, and Roberto “Manos de Piedra” (Hands of Stone) Durán, they both paid him a small but moving tribute to commemorate his first world championship.

“Thanks to all Colombian people, and to everybody in general and to Gilberto Jesús Mendoza for this tribute,” said the champion in front of a painting portraying the image of the Colombian boxing legend. Cervantes also affirmed that he remembers that his contender, the Panamanian boxer Alfonzo Frazer, was winning the fight: “I must admit, I was losing. But I used an uppercut, and a hook and I won my fight.”

On the other hand, Hands of Stone joked with Pambelé asking who could have won a fight between them and they put themselves on guard so the press could make a historical photo. Mendoza said: “My first boxing memory is next to Antonio (Cervantes), and I don’t want other celebrities here to get jealous, but this Convention is dedicated to him.”

The city of eternal spring is already beginning to see blooming the first flowers of this WBA 96th World Convention that will start this Sunday with the board meeting, but the official opening bell will ring on Monday night along with a moving tribute to Antonio Cervantes “Kid Pambelé.”

The WBA Medical Seminar Will Be Focused On Anti-Doping Issues 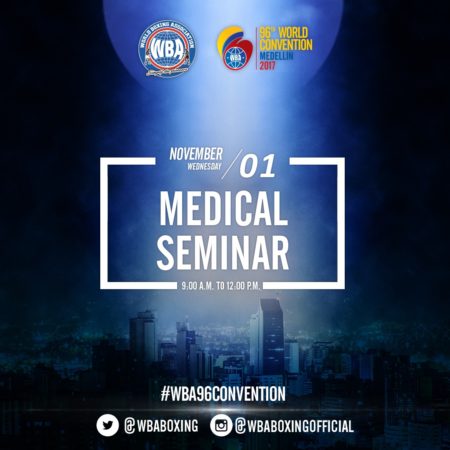