The fight took place at. Wembley Stadium on the new DAZN streaming network.  It was Joshuas third successful defense of the title as he became the first fighter to stop Povetkin inside the distance.

The fight was a very tactful one as it opened up in the first round until later in the first when they started to open up – Joshua to the body and Povetkin landed a left hook to the head that may have temporarily stunned Joshua, to everyones surprise.

Joshua came out in the second round with a bloody nose and Povetkin continued timing him very well with his hooks.  Joshua looked genuinely frustrated in the second round and it showed into the third round where he was giving ground to Povetkin, perhaps looking to change up tactics seeing as Povetkin still had the upper hand in the rounds.

Povetkin was loading up on all of his punches and doing very well until the fight took a turn in Joshuas favor in the fourth round, where Povetkin suffered a very bad cut above his left eye due to a punch.

Joshua was still looking to box his man in the fifth round, perhaps biding his time while seeing a wounded fighter in front of him with Povetkin suffering the very bad cut.

Povetkin rose, surprisingly beating the count, but the fight was ended shortly thereafter when it looked obvious that he could not continue and was taking unnecessary punishment.

Anthony Joshua remains king of the heavyweights with the impressive victory while holding the WBA super title.  He has another fight date booked at Wembley on April 13th – which is when fans are hoping for a showdown between him and the winner Deontay Wilder vs Tyson Fury.

Usyk and Bellew are excited for their showdown 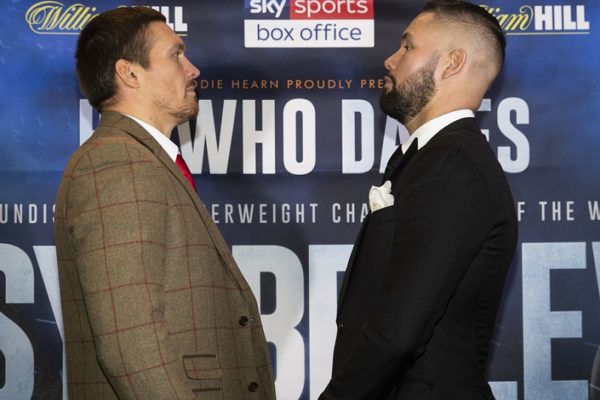