Joseph Parker is hoping he proves too fast and too elusive for Kali Meehan when they meet in tomorrow night’s fight at The Trusts Arena in Auckland.

The pair capped their media obligations today with the pre-fight weigh-in at a Newmarket bar, with Parker clocking in at 107kg and Meehan registering 110.6kg.

The undefeated 23-year-old is wary of his more experienced opponent’s power and expects Meehan to apply plenty of heat but is confident he has the speed and agility to outfox him.

“The last fight I saw, he put pressure on Shane Cameron,” said Parker.

“He’s got a big right hand and there definitely is power, so we have to be wary and be smart in the first few rounds, because I’m sure he’s going to come out solid.

Parker’s seven week training camp in Las Vegas concentrated on improving his defence, with many hours spent practicing with a tennis ball tucked under his chin paying dividends.

“I don’t need the ball anymore. The chin’s naturally staying down now so that’s a benefit,” he said.

He knows he faces a big test in trying to floor the 45-year-old veteran with 18 year’s professional experience under his belt. 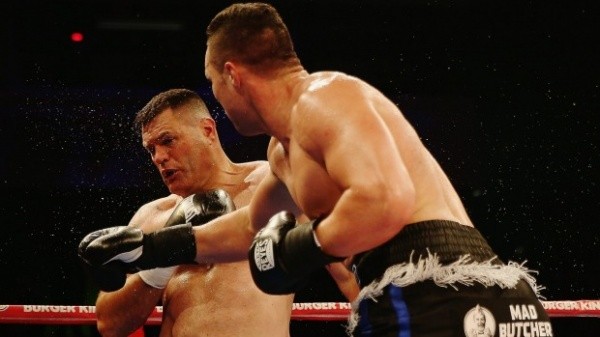