Even he defined himself as a shy person, who did not like talking to the press. When he was among the people as a spectator, and one pretended to interview him, one knew that it would be a very difficult task to get a full sequence of words out of him. However, as time went by, the increase in popularity made Marcos “El Chino” Maidana a star with greater media exposure that gave the public a new side of the boxer who, with an iron fist and courage, left permanent marks.

When the “Chino” remembers his childhood, he does it with pride, because he was happy: the former world champion was born and grew up in a little town called Margarita, in the province of Santa Fe, Argentina. There he lived in a ranch, as he calls it, and during the winter he slept sometimes on his father’s clothes and kept warm together with his brothers with a salamander (a cast iron structure that helps to keep the rooms warm). In that rural area he used to hunt birds as one of his childhood games. He grew up in the countryside with the support of Olga Susana Martínez and Orlando Américo Maidana. His parents made sure that none of their eight children ever lacked food beyond all the shortages. That’ s one of the reasons why “Chino” is a humble and compassionate person.

When he was 15 years old, while going from the countryside to the town, he found out by chance that they were practicing boxing. After leaving school one day, Marcos decided to ask about the classes and immediately began to practice under the guidance of his first trainer, Ricardo Linari. Ricardo Linari, gradually discovered the potential of the shy boy, because at first he didn’t pay enough first attention to him, but that was until he saw the boy fight. The “Chino” made his first fights in Margarita and Villa Manetti within the Santa Fe province and all of them were won by KO or Referee Stop Contest (RSC) as they say in amateur. Among those who trained him in his early years, he also remembers fondly the referee, Ricardo Ferreiro, who glimpsed the profitable future of this young farmer who needed to be polished.

One afternoon Ferreiro went to his house to take him to train with him, since Ricardo Linari had left and Marcos was left training alone. Doña Olga, his mother, immediately said yes to the proposal so her son wouldn’t be out on the streets and wandering around without any direction. That’s how he arrived, after six months, at the hands of Guillermo Serra, who trained him until he became professional. Then, as Maidana got older, he changed his trainer again.

In 2003, he participated in a national championship where he became champion by defeating another Argentine boxing figure, Lucas Mathysse, by a split decision. He was immediately called to be part of the amateur team where he won medals that made him try to qualify for the Athens 2004 Olympic Games where he was left behind. He closed his amateur stage with a record of 84 successful fights and only 4 defeats.

He wasted no time: while Athens was developing, the “Chino” made his debut as a professional boxer and knocked down every opponent that stood in front of him with the steel of his fists. He obtained the first belt from the World Boxing Association, FEDELATIN version, on December 22nd, 2006 when he defeated Miguel Callist of Panama by TKO in the third round in the Super Lightweight category. After that triumph he made seven fights of which only one was as a local, the rest were presented in Germany and Parana. On February 7th, 2009, he traveled in pursuit of his dream of becoming a World Champion, but lost by a split decision to Ukraine’s Andriy Kotelnik. However, a new chance was soon to come: in June of that same year, at the Staples Center in Los Angeles, Marcos Rene Maidana entered in the world’s boxing memory after a fierce battle against American Victor Ortiz. There the “Chino” won the WBA Interim Super Lightweight belt.

The thirst of glory that Maidana has always shown on the ring made him an international idol. He reached the Super Lightweight World Championship in 2011 against Petr Petrov and then the WBA Welterweight Championship in 2013 in Texas when he dethroned the brave Adrien Broner, who had a big surprise with the Argentine fighter.

He always had the desire to progress, grow and be able to give the family a good economic life through boxing: he not only fulfilled this dream, he surpassed it. Marcos Maidana took his ambition to the fullest when he had the double opportunity against the best contemporary pound for pound, Floyd Mayweather Jr. May and September 2014 were the two presentations they had to leave the image of the Chino at the top, who performed a luxury show against a Mayweather Jr. who underestimated the powerful punch of the rather reserved santafesino until then.

Everyone knows about the aftermath, as that reserved boxer, suddenly, after retiring from the ring, began to have a greater exposure due to the sudden weight gain, following his sudden descanse and decision to fight again. In addition, he began to show an unusual eccentricity in his image in order to emulate the rival with whom he closed his boxing career, Floyd Mayweather Jr.

The decision to fight again has been declared. The only thing left is to wait for the date and place of the show that was planned for April 18th in front of former Kick Boxing champion Jorge “Acero” Cali, of course it will not be in Welterweight, nor Super Welterweight and much less in Super Lightweight. The truth is that “Chino” Maidana is already part of the great book of the noble art of boxing. 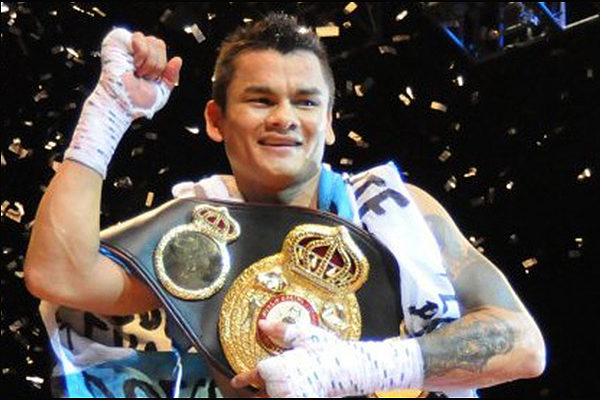