Feigenbutz may have had a bad night. Everyone has the occasional bad night, fighter and noncombatant alike. He is strong. He is tough. But his defense left a lot to be desired. He holds his hands high to protect his face, but he does not feint or move his head. Instead, he takes several steps backwards, often awkwardly and often to the ropes, which made counterpunching impossible, assuming Feigenbutz knows what counterpunching is.

The sturdy German seemed willing to take three or four punches to land one of his own in the hope of scoring a knockout. That is evidence of a good chin. It will not, however, be mistaken for defense. De Carolis, who succeeded in dropping Feigenbutz in the opening round, threw and landed more punches than the reigning and defending champion. He may lack Feigenbutz’s power, but his looping right hand, hardly a textbook punch, landed repeatedly. Rather than adapt, or perhaps unable to adapt, Feigenbutz was nailed with that shot throughout the fight.

Feigenbutz had his moments. He rocked De Carolis several times. But it wasn’t a performance to inspire confidence, not when he’s in line to fight the winner of the rematch between WBA World super middleweight champion Fedor Chudinov and Felix Sturm.

Feigenbutz is young. There is time to correct the flaws in his game. Rushing him into a world title fight might be a mistake, a costly mistake from which there’s no turning back.

In his defense Feigenbutz said, “I was ill last week with the flu. But I thought I clearly won.”

Feigenbutz may have won, but the victory wasn’t as clear as he thinks. 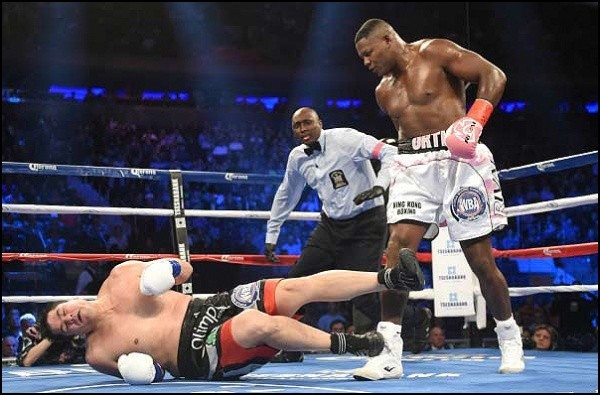