American boxer Joshua “El Profesor” Franco closed his camp for the fight against Australian Andrew “The Monster” Moloney -who holds the WBA Super Flyweight title-, which will take place on Tuesday, June 23rd, at the MGM Grand “Bubble” in Las Vegas, USA.

Franco is a native of San Antonio, Texas, but does his camp training in Oxnard, California. As an amateur, he has a record of 96 fights; while as a professional, he has 19 fights, most of them under the banner of Oscar De La Hoya’s Golden Boy Promotions.

48 hours before entering the ring, we were able to talk to him about the most important commitment of his life.

How has the coronavirus pandemic affected your personal and boxing life?
As a sportsman, I was affected by not being able to go to the gym because, even though I trained at home, it’s not the same. Personally, I love going out and I couldn’t leave the house.

For you, how does it feel to work with a coach of the stature of Robert Garcia?
He is very important, he has worked with many champions and has a lot of experience gained from great fights.

How did Joshua Franco change after his only loss?
I felt a bit discouraged, but then it made me a better boxer. I focused and I understood that I could come back stronger than ever.

Did you ever dream on fighting in Las Vegas?
It’s really good, I always wanted to get here and now I have the chance to do it.

Why do they call you “The Professor”?
The first time I visited Robert Garcia’s gym, I was wearing my glasses and they asked me if I was a boxer or a teacher, and since then they call me The Professor.

Will it affect you to fight without fans or family?
I don’t think so because they will be able to support me in the distance via TV, plus I’m ready to give my best.

What do you think about Andrew Moloney and Roman Gonzalez?
Moloney is a great boxer, with good height and strength. Román González is a warrior, he has a good style, and I would like to fight him.

Do you feel any pressure for being part of the first world title fight in times of pandemic?
No. On the contrary, I am motivated, excited and blessed by this opportunity.

Weigh in done in Las Vegas 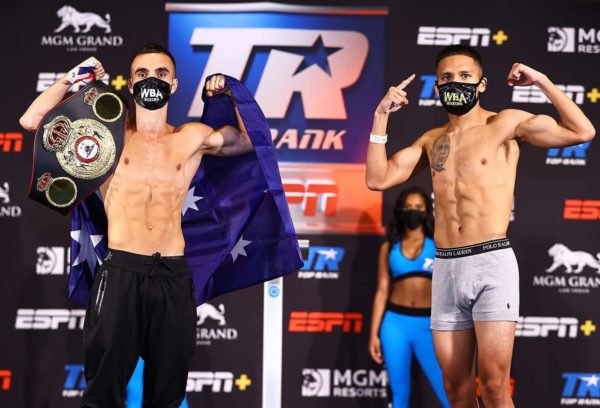